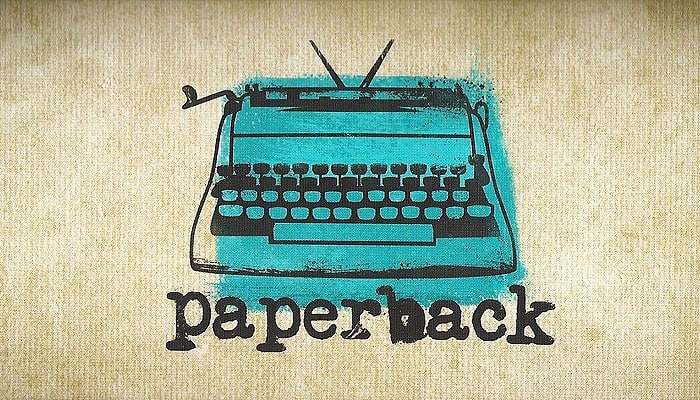 Welcome to Paperback! You are a group of novelists trying to complete paperback novels for Fame! The player with the most Fame at the end of the game wins.

Give each player their starting cards for their deck - These are the 1c K T,R,S,L and N cards and five of the 2c Fame cards.

Create 4 piles for the different ranks of Fame cards, according to the following chart:

Sort the Letter and Two-Letter cards by price (24-IOC). Combine the 84, 94, and 104 piles. Remove Attack cards they are recommended for advanced players only.

Shuffle each of the seven piles. Place them face up in the center of the table. Take the top card off each pile, and place below the pile, as shown above. These are the alternate cards; both sets of cards are available for purchase.

Note: The 24 pile doesn't get an alternate.

How to use your deck

A Player's deck is a collection of cards that are shuffled and placed face down - this is the Draw pile. Each turn, players draw their hand from this pile, choose which cards to play, and at the end of their turn, discard all unused cards from that hand.

Players cannot shuffle the Discard pile before the Draw pile is empty. Shuffling often occurs in the middle of drawing a hand - just pause to re-shuffle and keep drawing. Note how the cards re-cycle through the Discard and Draw pile.

Everyone draws their first hand of 5 cards. The first player is the person who most recently finished reading a novel. Turns continue in a clockwise order.

A turn consists of the following:

Form a word using the cards you have in your hand and lay out the cards for your word face-up in front of you. Fame cards can be used as any letter.

You may also use the topmost Common Card once by referring to it, leaving it on the Length Track. You need not use all the letters in your hand. Like most word games, no proper nouns, names or places are allowed.

Count up the number of letters in your word (include Wild cards). If the word is equal to or longer than the highest number showing on the Length Track, you gain the Common Card. This reveals the next Common Card for everyone to use and expands the length required to gain the next card. When the last Common Card is gained, the game is over.

If any of the cards in your word have special abilities, they activate now. The cards used to form the word activate their ability. The abilities on unused cards are not activated. Some abilities only activate if a condition is met.

If an ability says that you "may" do something, it's optional. Otherwise, you must use the ability. The abilities on unused cards are not activated. Make note of abilities that give you extra cards next turn.

Add up all the scores from the letters in your word, including the Common Card, if you used it. Apply score bonuses from the card abilities in the word. Remember - use the top left number to score your letters, NOT the lower left number.

Using your score(top left), you may purchase from the visible cards in the Offer including Fame cards. Multiple cards can be purchased, but the total cost(lower left) must not exceed this turn's word score.

Purchased cards are placed in your discard pile. If you purchased an alternate card, replace it with the top card of the corresponding pile. There should always be two cards available for purchase from each pile (except the 2

Remember - while purchasing letters will increase your ability to form longer and better words, purchasing Fame Cards is crucial for winning the game.

Draw 5 cards, plus any additional cards granted by abilities in your last word. If you run out of cards, shuffle your discard pile and create a new draw pile. Continue drawing up to your hand limit.

The game ends when any two of the Fame piles are empty OR there are no more Common Cards. If a player takes the last Common Card, he finishes his turn and the game is over.

To determine the winner, each player adds up the Fame points on the cards in her deck (include player hands, as well as draw and discard piles).

The player with the most Fame wins the game.

Ties are broken by the player with the most Common Cards.

Hand - Refers to the cards left in your hand that you didn't use in your word. They are still discarded before your next hand is drawn.

Trash - Does not refer to discarding. This means to remove a card from the game. Trashing cards happens before the Buy Cards step. It's helpful to make a pile for players to put their trashed cards.

Trashing is very useful for getting rid of weaker cards, thus increasing your chances of getting more powerful cards when you draw.

Gain - This means to acquire a card and put it in your discard pile.

Attack - When you use this in a word, it stays in play until your next turn. It only affects other players for that round and limits them in different ways. At the start of your next turn it is discarded.

If this is the Common Card, you can play it to create two words with your hand. Score +l

If this is the Common Card, you can play it to reverse the letters in a Two-Letter Card. If you do then score +l

If you want more direct conflict in the game, add the Attack cards to the Offer piles when you're setting up the game.

To play with these, shuffle them and deal one to each player at the start of the game. They grant each player a unique power to use during their turn.

Shuffle the Award cards and reveal one, then place it in the Offer. This card is awarded at the end of the game based on the conditions listed on the card.

Shuffle the Theme cards and reveal one, and place it in the Offer. This card is given to the player that forms a word that fits the theme of that card (some examples are provided on the card). When a player is trying to claim the Theme card, all players vote whether the word fits that theme.

If a majority agree, they can take it and put it their play area face up (doesn't get added to their deck). If another player forms a word fitting the Theme card later in the game, they take the card(and points) from the previous player.

At the end of the game, the last player in possession of the Theme card adds it towards their final Fame total.