There once was a time full of relentless heroic wars and fantastic creatures. Paper Tales is the last remaining relic of those forgotten centuries. Time has come to re-open this book, and to relive these legendary ages!

Paper Tales is a card game for 2 to 5 players. Collect Legend Points to rewrite History in your favor.

On each turn, choose the best combination of Units: they symbolize your Kingdom's glory, through its wars and achievements. Quickly, however, you will lack space, and your Units will inexorably end swept away by the passing of time.

Some Buildings and Units produce resources, indicated by

These resources are never materialized by components: they are available for as long as the cards which produce them are in play.

Resources are required for constructing Buildings and are used for the resolution of some cards' abilities.


Anatomy of a Unit Card

2 Number of copies of the card in the game


Anatomy of a Building Card

(front side) and level

(back side). Level 2 Buildings earn more Legend Points and provide an additional ability.

3 Legend Points earned at the end of the game.

Place the Score track at the center of the table. Setup the Time token on the first spot of the Turn track.

Form 2 pools with the Gold and Age tokens. Each player takes 3 Gold from the Gold pool. Players' Gold is never hidden.

Each player chooses a color and takes corresponding Player's Aid card and Score token. Score tokens are placed on the Score Track, on square.

Players each take a set of 5 different Building cards (Town, Tavern, Mine, Temple and Barracks). These are the Buildings that will be available for construction throughout the game.

Shuffle all Unit cards and place theme face down in a pile. Leave a space available for forming a discard pile. Cards that are discarded during the game will be placed here face-down.

Players develop their Kingdom by deploying Units and constructing Buildings. They earn Legend Points through wars, constructions and card abilities. The player with the most Legend Points after 4 game turns is the winner.

A player's Kingdom is composed of the Units and Buildings that they have in play in front of them.

Each player has 4 spaces available for putting their Units into play: 2 in the Front 1 and 2 in the Back 2.

Buildings that are constructed during the game are placed close to the Units 3. Remaining Buildings are kept aside and can be consulted at anytime.

A game is composed of 4 turns of 6 successive phases. During each phase, players play simultaneously before moving to the next phase. The 6 turn phases are as follows:

A game turn ends after the Aging phase.

Players select the Units that they will be able to deploy afterwards.

Each player is dealt 5 Unit cards from the draw pile. They each keep one of their choice for themselves, then pass the 4 remaining cards to their left neighbor.

Out of these 4 new cards, players each keep one again for their hand and pass the remaining ones to their left neighbor. Players proceed this way until each of them has selected a new hand of 5 cards.

The direction in which cards are passed changes de- pending on each of the 4 game turns: to the left on turns 1 and 3, to the right on turns 2 and 4.

At the end of the phase, each player adds any card kept from a previous turn to their hand.

Note: If the draw pile is exhausted, shuffle the discard pile to form a new draw pile.

Players put Units from their hand into play in their Kingdom.

Each player has 4 spots available in front of them for deploying their Units: 2 in the Front and 2 in the Back. This is the maximum amount of Units that they can have in their Kingdom at the start of the game.

Later on in the game, they will have the opportunity to unlock a 5th spot, in the Front.

Each player selects which Units from their hand they want to put into play in their Kingdom. Among the ones that they do not want to play, they are allowed to keep a single Unit and must discard the others. They place it on their Player's Aid card for the next turn.

Players simultaneously place the Units that they want to put into play, face down on available spots in their Kingdom.

If players lack space in their Kingdom, they can freely discard Units already in play or move them from one spot to another.

When all players are done playing, they simultaneously reveal the Units that they just played, and pay their cost in Gold.

If a player does not have enough Gold, they have to discard any Unit(s) that they are unable to pay for. A Unit that has been brought into play during a previous turn never has to be repaid for.

Fred wants to play 2 new Units whereas he already has 3 others in play. He decides to make room in his Kingdom by discarding Time Master and by moving Hunter from the Front to the Back.

He then lays, face down on the 2 available spots, the 2 Units that he had been planning to put into play.

When everyone is ready, Fred reveals these newly played cards and pays 3 Gold: 2 for Demon and 1 for Miner.

icon indicates an ability that is only triggered once, and as soon as the Unit is revealed.

Kingdoms fight with each other to earn Legend Points.

Players each determine the strength of their King- dom by summing up the 9 strengths of the Units that they have in the Front. A value featuring a * on a 9, means that this card has an ability that may modify its strength.


Each player then compares their Kingdom's strength with each of their 2 neighbors', to the left and to the right. If a player has a higher or equal strength than one neighbor, they win a War.

Kingdoms produce their income in Gold.

Each player earns 2 Gold from the pool, plus any Gold brought by abilities indicated by a symbol on Units and Buildings in their Kingdom.

Players can use their and

resources to put Buildings into play in their Kingdom.

The Resources required for constructing or upgrading a Building are never spent. For players to be able to use them, they just need to be produced by Unit or Building cards in the Kingdom.

Each player can perform one single Construction action out of the 2 following options:

The player can put into play one of the 5 Buildings that they received at the beginning of the game and that they did not construct yet.

They can put it on its level

side or directly on the level

side. In both cases, they have to pay for both the Land cost and Resources cost of this Building.

Land cost: When they build a new Building, players must pay 2 Gold for each Building that they already possess in their Kingdom.

Resources cost: The player has to produce all Resources corresponding to this Building's construction cost, thanks to the Buildings and Units already in play in their Kingdom.

For constructing it as level

, the resources indicated by the

icon have to be produced.

For directly constructing it as level

, BOTH the resources indicated by the

icon AND those indicated by the

icon have to be produced.

, requires the player to pay the Resources cost indicated by

icon. There is no Land cost to be paid. The player simply flips the Building on its level

Denis wants to upgrade his Town. So, he uses Forest elemental, which produces enough gold to pay for the cost indicated by

Any player with at least one Level

Building in play benefits from a 5th available spot, which is located on the Front, for putting an additional Unit into play. This is the maximum number of spots that can be reached. The bonus is indicated by the icon next to every level

Thanks to the Level

Tavern that he just constructed, Jean-Baptiste will for now on be allowed to have 5 Units deployed in his Kingdom

Aged Units die, and all others grow older.

All Units that already have one or more Age tokens on them die: they are discarded. One Age token is then added on each Unit that is still in play.

Colossus and Farmer each have an Age token

. They die and are discarded.

Denis has now only 2 Units left in his Kingdom. He has to add an Age token

on each of them.

Once the Aging phase is over, the Time token is moved one spot forward. A new game turn begins.

The game ends at the end of turn 4. Players add to their score the Legend Points showed on the Buildings that they constructed.

The player with the highest total of Legend Points is the winner.

In case of a tie between some players, the one with the most Gold remaining wins. If there is still a tie, players share victory.

The following adjustments are used for playing with 2 players. We recommend that players have already played a game with the normal rules before discovering the game in its 2 player variant.

Both players each receive 9 Unit cards from the draw instead of 5. When a player keeps a card, they then have to discard another one of their choice, be- fore giving the remaining cards to their opponent.

If a player has a greater or equal strength than their opponent's, they win one War, as indicated in the normal rules.

If their strength is greater or equal than twice their opponent's strength, this player wins 2 Wars. 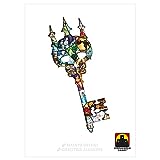 Paper Tales: Beyond the Gates Expansion