Nika, inspired by ancient Greek geography & warfare, is based around two core mechanisms: facing and formations. Pieces can be routed off the board if attacked from the side or back, but not from the front.

A routed piece can rally back onto the board at the cost of an action. Your pieces can move or rotate together in a phalanx if they are adjacent and facing the same way, and you can push back enemies facing you if your phalanx is deeper than theirs.

There are four cities: Athens (white) and Messene (blue) are allied against Sparta (red) and Thebes (black). Allies start across the board from each other, and you win by getting a piece into your victory area in the heart of your ally's territory.

Each two-city alliance can be played either solo or with a partner, so the game can support two, three, or four players.

Every player has enemies on both sides, making the distribution of both pieces and actions between fronts a strategic and often tactical consideration. Maneuvering, timing, coordination, and sacrifice are all key elements of strategy.

Says designer Josh Raab, "Nika is the ancient Greek word for 'conquer'. The concept of Nika came to me in a dream while I was studying abroad in Athens.

The rules were honed across nearly two years of testing. The board shape and core mechanics were inspired by ancient Greek geography and warfare. Greece has many narrow valleys and mountain passes, and sometimes the only way to defeat an enemy force was to collide with them head-on and literally push them off the field.

This othismos ('shoving') is thought to have been the critical phase of most battles between hoplite armies, who were the heavy infantry that dominated ancient Greek war for four centuries". You command a Greek city's hoplite soldiers who must force their way through enemy lines. Your troops can push or rout those who would block their way across the narrow battlefield.

Coordinate attacks with your ally to secure victory, but make sure to watch your flanks!

The object of the game is to move at least 1 of your city's pieces into your victory area, marked in your color on the opposite side of the board. … 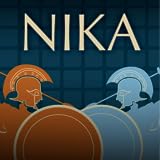