Food, Wood, Bricks, and Money are unlimited. If more pieces are needed, improvise using whatever.

Place the Town Board, Whaling Board, goods and money in the middle of the play area.

Gather the buildings with the number of players shown on the back and all of the bonus buildings. Place the buildings next to the town board.

Players select a color and receive the two workers of that color, the player board for that color (See Player Board: p13) and the two ships depicted on the board, with base in the color and a black or white sail. Ships and workers are kept on the player board when they are not in use.

In turn order, each player also takes $5 worth of goods and resources from the general supply to begin the game with. (Example: 1 brick, 2 food, and $1).

In New Bedford, the goal is to accumulate the most points from whale tokens, buildings, and money over 12 rounds. Each round is divided into 4 phases:

Each round starts with an Action Phase, placing workers on action spaces and immediately taking the actions. Building buildings provides more action spaces.

When all players have placed their workers, the Movement Phase begins. Ships move toward the return space. Players pay to receive whales on returning ships or must sell them.

When all ships have finished moving and returning, the Whaling Phase begins. Whale tiles are drawn, and players add them to ships, starting with the ships farthest out.

Once all ships have had a chance to select whales the round ends. In the End of Round Phase, workers return and the first player and round markers advance.

In clockwise order, players place workers, one at a time, on action spaces, until all players have placed both workers. All town spaces and most buildings are actions. Actions are resolved immediately.

When a worker is placed, the player may also make exactly one purchase of either 2 wood or 2 food for $3, before completing the selected action. A reminder of this is shown on the Player Board.

Initially, only actions on the town board and whaling board are available. These actions can be used multiple times each round, with the first player to place a worker on these spaces receiving a bonus.

The buildings make more actions available after they are built. Unlike actions on the town and whaling boards, a building may only be used once per round. The owner may use it for free, but any other player may use it by paying the owner $1.

A player cannot take an action he is unable to perform.

Example: Using the Dockyard without having a ship to launch, or using the Lumber Mill without selling wood.

Town action spaces are always available and can be used multiple times per round, even by the same player. Every player who uses the space takes the normal action next to the plain worker symbol.

The first player to place a worker on any empty town action also takes the bonus action, shown next to the worker symbol with a 1 on it. The Town action spaces are as follows:

Farm: Add 2 food to your personal supply. The bonus is to receive 1 extra food

Forest: Add 2 wood to your personal supply. The bonus is to receive 1 extra wood

Warehouse: Add 1 brick to your personal supply. The bonus is to receive either 1 extra brick, 1 food or 1 wood.

General Store: Sell goods and take $1 for each or food sold, and $2 for each brick. The bonus is to receive $1 extra in total. The selling price for each good is shown on the Player board.

Town Hall: Build a building, by returning its cost to the supply and placing the building on the player's corner of the board. The bonus is to pay 1 less brick, food, or wood resource. See Buildings. When using the bonus, the player selects which resource he will pay 1 less of.

The player cannot reduce the cost below zero of a given resource, or use the bonus to take a resource that is not in the cost.

To build a building, the player pays the cost to the general supply from his personal supply, and places the building on his corner of the town board, aligned with the steps around the edge.

The player who builds the building is considered the owner. A player may own any number of buildings.

There are two types of buildings. Light colored buildings provide new action spaces, when they are built. Unlike town actions, building actions can only be used once per round, and give no other bonus.

The owner of a building can use its action space for free. Other players can use the building's action space, but must pay the owner $1 before using it.

Players do not receive the Docykard or Shipyard Bonuses when using the Drydock.

The tavern only has an effect if at least 1 empty sea token was revealed during the previous whaling phase.

The Tryworks must be occupied during the movement phase to have its effect.

It is possible to receive the bonus for the same town action twice in a round if a player leaves and re-enters a space.

The whaling board contains the dock, the whaling track, the round track, and two additional action spaces which can be used multiple times per round, like town actions.

Note: The food cost to launch a ship is never less than 0 food. A player may not launch to a space if he does not have enough food to pay the cost.

Players may only ever prepare and launch their own ships, and ships can only be launched to spaces with a food cost shown.

Spaces on the Whaling Track are labeled 1st, 2nd and 3rd to track the order in which ships arrive at the space. This order is important for returning ships and selecting whales.

No more than 3 ships can ever be on a space. Players may not take actions that would result in a fourth ship on the space.

In the movement phase, all ships move up the whaling track toward the Return space. Starting with the ships closest to shore, each ship moves one space closer to shore.

Any ships moving into the Return space return to port in the same order as they selected whales in previous rounds.

Each whale token shows a cost, called the "lay", in the upper left. When a player's ship reaches the Return space on the whaling board, the lay must be paid to receive the whale tokens on that ship.

Each token for which the lay has been paid earns the number of points shown in the barrel in the upper right.

A player who has taken the Tryworks action can keep up to a total of 3 Right Whales in that round without paying for them.

Any tokens that the player cannot or chooses not to pay for must be sold.

When selling whale tokens, the seller first takes half of the cost of each sold token from the supply. This money can immediately be used for other whales on the same or another ship.

A buyer pays the full cost of each token to the general supply, and adds the whale to his personal supply, to be scored. Tokens that are not bought by any player are removed from the game.

After all of the whales are taken from a returning ship, the ship piece is returned to the player. Each ship's return, including buying and selling, is performed 1 ship at a time, in order of return, and must be completed before returning the next ship.

After all ships move, the whaling phase begins. Whaling is the primary means of earning points in the game.

After the correct number of tokens is drawn, tokens are selected by players in order of position on the whaling track. Ships farther from the return space select first. Ships on the same space select in the order of arrival.

The owner of each ship can select a whale from the drawn tokens and place it next to the matching ship on the player board. Players are not required to select a whale token for a ship.

Any whale tokens or empty sea tokens that are not selected during the whaling phase remain out until the start of the next whaling phase.

Since valuable whale tokens are taken but empty sea tokens are returned to the bag, the selection of whales will get worse as the game progresses.

Each player has a board to track whale tokens and goods. All information is public, and players may not hide resources, money, or whale tokens.

Workers and ships should remain on the player board when not in use.

Goods should be stored in the upper left portion of the player board. Whale tokens that have been returned should be placed in the lower left. The distribution of whale tokens is listed in the whale token area.

Each player has a ship with a white sail and a ship with a black sail. The right side of the player board is used to track whale tokens on each ship.

Whales in the holds of ships earn no points until the ship returns and the lay has been paid.


End of Round Phase

The owner of the Post Office also takes $2 in this phase.

The game ends after the 12th round.

Before scoring, the movement phase is repeated until all ships return, so that whales remaining on ships can be obtained.

Ships that did not return during the movement phase of the final round still select whale tokens during the whaling phase of round 12.


Scores are tallied on the score sheet in the following manner.

Whale points: A player earns for points for any whale tokens he has.


Building points: Each building earns the owner 1 point. Each bonus building counts as one point in this category. Do not include the bonus points earned from the buildings.

Bonus points: Points from bonus buildings are scored separately from points earned in other categories.

Money points: Each $5 a player has is worth 1 point

Extra resources are worth no points at the end of the game.


The player with the highest score wins.

In case of a tie, tie breakers are, in order, the player with the most whale tokens and the most money. If it remains tied after this, players should mutually enjoy their shared success. 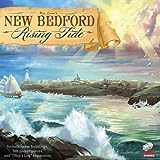