The monsters are loose again!!! Well, that's actually not a bad thing - they make living in this mansion really fun! But right now, Grandma Frieda is standing outside the front door and she is terribly frightened of monsters.

You must catch all the monsters and hide them from Grandma before she sees them!

The monster cards show which monster must be captured next. Use the sliders to push the monster as quickly as possible to the middle of the mansion and into the monster trap! You will have to work together on teams to do this.

The 3- and 4-player versions of this game are played in teams, proceeding clockwise.

The oldest player and the player on his or her left start as the first team. The following example shows how the teams are formed.

The other players are responsible for the hourglass timer. They call out "On your monster, get set, go!" and flip the hourglass over ...

Now it is up to you to capture as many monsters as possible before the sand in the hourglass runs out!

When the hourglass runs out, the other players shout, "Monster Trap!"

You must stop moving the sliders immediately. If the last monster has not been pushed into the trap, then you cannot place the monster card on your discard pile.

Instead, place the card face up next to the monster deck.

Now throw one of your eye tokens into the monster trap! This ends the round for your team.

The next team (in the example on page 2, it is the yellow and purple players' turn) now places the mansion between them. The other players take the hourglass, shout "On your monster, get set, go!" ... and flip the hourglass over.

Now the new team tries to catch as many monsters as possible.

After each team has taken its turn, the first team plays again and so on. If the deck of monster cards is used up, shuffle all the face up cards that were placed next to the deck and continue to play with the new deck.

After 12 rounds, when all the eye tokens are in the monster trap, the game ends. Each team counts the collected monster cards on its common discard pile.

First, the team that collected the most monster cards is named the Top Monster-Catching Team.

Then each player adds the number of monster cards from each team they were in together. The player who collected the largest number of cards is named the Very Best Monster Catcher and wins the game.

In the case of a tie, there are several winners. Alternatively, you can count the number of open eyes on the monster cards each tied player has won (there are monsters with 0, 2, 3, and 5 eyes open). Whoever has collected the most open eyes wins.

Play as described above, but with the following changes: 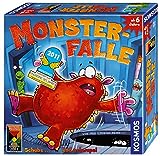