The play of the Expert game is similar to the Family version. However, the players must take into account additional objectives that yield points at the end of the game.

Objectives: in this version, each player takes two secret objectives: neighborhood and area. These area objectives are different than those of the Family version.

The objectives of the Expert version require the construction of several buildings. These goals are detailed in the "Secret objectives" player aid.

Instead, shuffle the 5 area cards of the Expert version. Each player takes a card, looks at it in secret, and places it face down in his play area. Discard the remaining area card without looking at it. Go through the same process with the neighborhood cards.

The game ends as soon as any player has built his last building. Then the players reveal their secret cards and count their points: 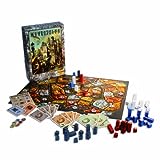