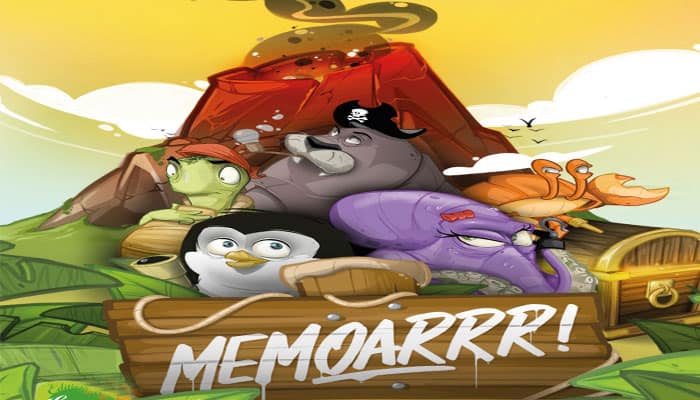 Where is my ship? -As you put the first coins in your pockets, the earth suddenly shakes. Apparently, Captain Goldfish hasn't hidden his treasures on a volcanic island for nothing.

Lava flows into the sea and wraps the island in dense steam clouds. You all start running, loaded down with treasures. But who knows how to get back to the ship?

On your turn, you must reveal 1 Location and check whether it is connected to the last Location discovered.

Cards are considered to be connected if both cards either show the same animal or the same landscape. If they are not connected, you are eliminated from this round. Whoever is the last remaining player in the round takes 1 Treasure.

Then, all of the revealed cards are turned face down and you start the next round. All cards remain in the same place for the entire game. Try to remember them to get more Treasures than the other players.

Shuffle the 25 Location Cards and then place them cloud side up in a 5x5 grid (the island) in the center of the play area. Then, without revealing it, take the center card of the island and put it back in the box.

Shuffle the 7 Treasures and place them face down as a stack in the center of the island. Then, in random order, place Volcano cards (1 less than the number of players) on the top of the stack.

Give each player 1 Summary Card to place face up in front of them. Return any extra Volcano or Summary Cards back to the box.


Secretly look at the 3 middle cards on one side of the island without showing them to your opponents. Each player must choose a different side of the island. Then, place the cards back in place with the cloud side up.

Whoever last experienced a volcanic or emotional outburst will be the first start player.

At the beginning of each round, the start player chooses 1 Location to reveal. Play continues in clockwise order until all but 1 player has a Volcano in front of them. This remaining player without a Volcano wins the round and takes the topmost Treasure Card from the stack.

Then all of the Volcanoes are randomly placed back on the stack on top of the remaining Treasures, all of the Locations are turned face down to the cloud side without changing their place, and another round begins. After the 7th round, the game ends.

Important: Never change the position of any Locations on the island during the game.

Whenever it is your turn, you must reveal 1 unrevealed Location. Then you must check whether it is connected with the last Location revealed:

Important: You always compare the current Location with the most recently discovered Location, regardless of whether the last Location was successfully connected or not.

It can happen on your turn that you know there are no longer any suitable Locations with a connection to reveal. Nevertheless, you must still reveal 1 Location. This is a deliberate part of the game. Plan your next round carefully to avoid this problem.

What special cases must we consider?

The next player in the clockwise order would be Marcel, but as he has a Volcano in front of him he is skipped and play passes on to the next player (Lucas).

If there are no more Volcanoes available at the beginning of a player's turn, the round ends immediately. All but 1 player will now have a Volcano in front of them.

The player without a Volcano now takes the topmost Treasure from the stack and, without looking at it, places it face down in front of him.

If this is the 7th and last Treasure, the game ends. Otherwise, prepare for the next round.

All players except Bianca have a Volcano in front of them. She takes the top Treasure from the stack at the beginning of her turn. The round ends now.

At the end of a round, you turn all of the revealed Locations face down so the clouds are visible.

Important: Never change the position of any Locations on the island during the game.

Who will be the new start player?

All players with a Volcano now place them back on top of the stack in random order. The player who had the Volcano with the most birds becomes the new start player and begins the new round by revealing 1 Location.

Amanda returned the Volcano with 7 birds back to the stack. She will be the new start player and will begin the new round.

After 7 rounds the last Treasure is claimed and the game ends immediately. Now, reveal your collected Treasures and count the number of rubies on them. Whoever has the most rubies wins.

In case of a tie, the tied player with the most Treasure Cards wins. If there still is a tie remaining, the player who has the Treasure with the most rubies wins.

Bianca has 2 Treasures each with 2 rubies. Lucas has 1 Treasure with 4 rubies.

Amanda has 2 Treasures with 1 ruby and 1 Treasure with 2 rubies. Marcel has 1 Treasure with 3 rubies. Amanda wins because she has collected as many rubies as Bianca and Lucas, but has more Treasure Cards.

If you want to play with less luck, you can sort the stack of Treasures at the beginning of the game instead of shuffling them randomly.

Put the Treasure Card with 4 rubies on the bottom, then the one with 3 rubies, followed by the three cards with 2 rubies, and then the two cards with 1 ruby on the top.

Then, as usual, place the Volcano Cards (1 less than the number of players) in random order on the top of the stack.