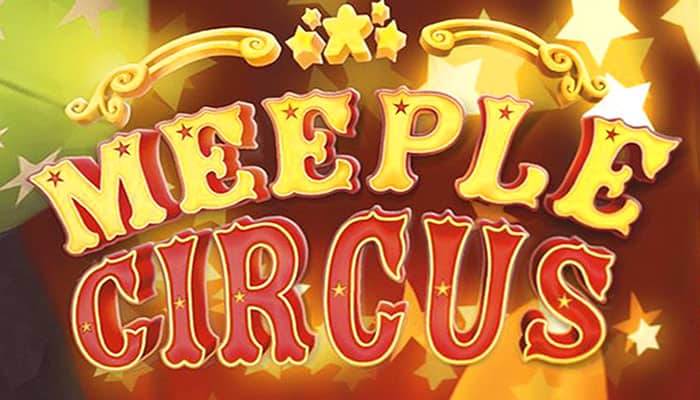 On the program for tonight, 3 numbers with 2 rehearsals and a main performance in front of a crowded audience! Shine on the circus ring and receive the most applause in order to win the game!

A game of Meeple Circus is played in 3 Circus acts:

Each Circus act has 4 phases:


I. The First Rehearsal

During the preparation of a circus act, players add new acrobats and accessories to their circus. Starting with the first player and proceeding in a clockwise direction, players must perform following two actions in the order of their choosing : take any one Component tile and tahe one 1st Act tile.

The players then retrieves the components corresponding to their tiles from the reserve and place them next to their circus ring.

Note: The term "component" used here in the rules and on certain game tiles refers to any accessories, Acrobat or Guest Star.

When all players are ready, the first player starts the music via the Meeple Circus application (or from the Matagot website).

When the music begins, all players will construct their circus act at the same time.

The players are not obliged to use all their components during their circus ACT.THE laying of a component is completely up to the player to choose, as long as it respects the following rules:

All components must be placed inside your circus ring.

All components must be placed on their side except for beams and barrels.

All components on the ground must carry at least one other component.

Components that do not follow ALL of these rules will not be counted in the evaluation of the circus act.

When a player finishes his circus act, he must spread his hands and say, « Tadaaaa! »

and the Speed Token

If a player has not finished by the end of the music, he must immediately stop adding to his circus act.

When evaluating the circus act, players win applause based on different criteria. When a player wins applause, he advances his score marker as many spaces on the clap-o-meter board.

A player wins applause through:

The player scores as much applause as indicated on each of the Public demands cards whose conditions are fulfilled. It is possible to make the same card several times if at least one of the elements is different.

The same component can count for different public demands cards. The figures must be taken in the direction indicated by the card.

The meeples illustrated in gray can be Acrobat meeples of any color or Guest Star meeples of the same form (the Extreme horse rider, Tarzan, the Elephant trainer or the tightrope artist).

In her circus act, Madison made 2 of the 4 Public demands cards. She met the first demand once and met the second demand twice for a total of 3 + 3 + 3 = 9 applause!

Beginners Each blue acrobat touching the ground brings you 1 applause.

Intermediates Each yellow acrobat that does NOT touch the ground brings you 1 applause.

Experts Every red acrobat that carries no element brings you as much applause as its height in the circus act. To do this, use the measuring ruler, the highest zone touched by the acrobat tells you how many applause you win.

Each player in possession of a speed token adds the number of applause indicated.

At the end of each circus act:

Each player keeps all his acquired components and places them next to his circus ring.

The player with the smallest score (in the case of a tie: the youngest) becomes the first player and takes the

The first player puts the remaining tiles and number 1 tiles in the box.

Then he draws 6 new Component tiles and as many 2 nd Act tiles as the number of player plus one.

Finally, the first player returns the First scoring tile back to the box, to show the first act has passed.

The second rehearsal introduces the Guest Star, who are each unique and allow players to realize even more fantastic numbers! This second act is played in the same way as the first with the following differences:

When preparing, players now use the 2nd Act tiles.

During the evaluation, the players will also add applause won from Guest Star. Each Guest Star will win applause if it is used in the right way.

When preparing, players use the 3rd Act tiles.

The great performance is enacted player after player. Starting with the player with the least applause score and then continuing in a clockwise direction.

Note: Some 3rd Act tiles require specific music that you will recognize by the music symbol

The final evaluation has the following changes:

After the evaluation of the 3rd Act is completed, the game ends.

The player with the most applause is the winner! In the case of a tie, the victory is shared.