In the game of Medium, you and your friends will harness your powerful extrasensory abilities to send psychic messages across the table!

Together, you and a partner will think of the Medium: the one word connecting the two words on your cards - and say that same word out loud, at the same time.

You will act as a medium, to find the medium, through the medium of cards! It's called Medium. And when it happens, it feels amazing.

Phase One: Find the Medium

Step 1: One player plays a card, then their partner does.

On your turn, you will partner with the player on your left, who will choose and play one card from their hand face-up in front of you. Then you will pick a card from your own hand and play it face-up next to your partner's card.

Say the word out loud as you play the card. Using this set of two words, you and your partner will attempt to find the Medium.

Step 2: The partners attempt to match.

THREE...TWO... ONE... and then say whatever word you think is the Medium.

For example, if the words were:

TACO and BEACH: Maybe it's SHELL?

LARGE and SMALL: The Medium is literally MEDIUM.

If you match, that's a Mind Meld! Take one Mind Meld token from the First Attempt pile (worth 5 or 6 points), and place it between you and your partner to create a shared pile of tokens to be scored at the end of the game. Your turn is now over.

If you and your partner don't match on your first attempt, you now have a second attempt to match, using the words you just said rather than the words on the cards.

For example: The cards were TIGER and BLACK. You said PANTHER, but your partner said STRIPE on your first attempt. PANTHER and STRIPE now become the words you'll use to find the Medium on your second attempt. But you can't use any words on the original cards so you couldn't say TIGER here.

If you match on your second attempt, take a Mind Meld token (worth 3 or 4 points) from the Second Attempt pile and place it in a pile between you and your partner.

If you don't match on your second attempt, you have one last chance. Use the two words you guessed on your second attempt. Remember, you can't say any previous words as the Medium. If you Mind Meld, take a Third Attempt token (worth 1 or 2 points), place it in a shared pile of tokens with your partner, and your turn is over.

If you don't match on your third attempt, your turn is over and you don't get any points. Don't feel bad - this happens to Medium players all the time.

At the end of your turn, place the used word cards into the discard pile. Then, you and your partner both draw a card, so you each have a full hand of six cards.

Now it's time for play to progress around the table. This time, you get to watch as your former partner turns to the player on their left and they take a turn! Soon enough, the player to your right will be looking for a mind meld with you when it is your turn to play a card...

The diagram above shows a 6-player game.

The arrows show who each player is partnered with throughout the game. In a 6-player game, there are 6 teams.

Once you've played a couple of games, add in the Extra Special Power (ESP) cards, which grant each player one-time-use-only powers. There are two ESP cards in Medium: Psychic Link and Clear Mind.

Give each player one of each ESP card face-up on the table in front of them (the full-color side with the points and card text). Players will flip cards face-down (the black and white side) when they use these powers. Each unused ESP card is worth 2 points, shared with your partner(s), at the end of the game.

Only one player can play an ESP card on any turn. If multiple players attempt to play one, whoever flipped their card first gets to use it.

Remember to add the points from unused ESP cards to your totals - with your partners on both sides, or with your teammate if you're playing in teams - at the end of the game.

Predict what your opponents will say.

Play at the beginning of another team's turn, once they've revealed their cards. You'll play along with them on their first attempt. Count down and say your word with them. This will have one of four outcomes:

Points earned from Psychic Link are shared with your teammates.

Play at the beginning of your turn to discard cards from your hand. Get rid of as many as you like and draw back up to six cards. If you draw a Crystal Ball card, place it face-up in the middle of the table as per usual, and continuing drawing cards until you have six.

Play until the crystal ball shatters

When you draw the first Crystal Ball card, place it face-up in the middle of the table.

As your group's combined psychic energies grow, cracks begin to form in your crystal ball! Draw another card, ensuring that you have six cards. Do the same when the second Crystal Ball card is drawn.

Your crystal ball continues to fracture as it is overcome by raw mental power! When you draw the third and final Crystal Ball card, it shatters your crystal ball, breaking the psychic connection in the room.

Finish the round you're playing, ensuring that each team has an equal number of turns by the end of the game. Play ends with the team of the starting player and the player to their right.


Count up the scores and see who won

Since you're on two teams, you have two scores: one each with the player on your left and on your right. Count up the points in your shared pile of Mind Meld tokens and unused ESP cards, if you're using them.

The pair with the most points wins, if you're into points and scoring and winning. If there's a tie, how about it's just a tie? Would that be so bad?

If you have an even number of people, you can choose to play on a team with a specific partner rather than playing with the person to your left and right.

Partner with the person sitting across from you for the entire game. Alternate who plays the first card each turn. Points are scored as a team. All points earned from ESP cards are added to the team score.

For two players, use three sets, shuffle in the Crystal Ball cards, don't use ESP cards, play as one team, and count your shared points. Just play for fun!

Yes, you can use proper nouns.

No, it doesn't have to be one word - just one idea. Something like GARLIC BREAD or WASHING MACHINE or LADY BIRD JOHNSON is totally fine.

But you do have to say a word. If you count down,

"3... 2. 1..".and you don't say anything, your turn is immediately over. So make sure your partner is ready before starting the countdown.

It's up to the rest of the table to determine whether two words are a match or not, and here's the official rule: be cool about this.

Just a hint: You'll tend to have more matches if your guesses are more general rather than super specific.

You're more likely to match on WIZARD than on MERLIN or on FLOWER rather than HYDRANGEA.

But the most important thing we can tell you is: keep the game moving. Go with the first thing you think of. Maybe you'll get it, or maybe you'll get it on the second attempt. Just have fun with it.

The best way to play Medium is whatever way you and your friends play it. The only way to match is to say whatever word your friend is thinking. And the best way to connect with your partner is to look directly into their eyes and use your psychic link to mentally send your word their brain. Feel the psychic energy in the room. 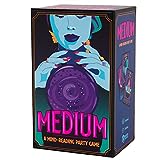