Mansions of Madness is a cooperative game of investigation and horror inspired by the writings of H. P. Lovecraft. During each game, one to five players explore a location to unravel a mystery. Players must work together to overcome the challenges presented to them by a fully integrated companion app.

Mansions of Madness is a cooperative game. All players are on the same team and win or lose the game together. The investigators' ultimate goal is to explore the scenario's map and piece together the evidence and clues required to solve the mystery.

Before playing each game, perform the following steps in order. The setup diagram on page 5 shows an example of these steps.

For their first game, players are recommended to play the "Cycle of Eternity" scenario. This scenario is shorter and less complex than the other scenarios, making it well suited for learning the game.

Before choosing a scenario, if you own the first edition Mansions of Madness base game and/or any of its expansions, you can integrate the components of those products as described by the Conversion Kit rules insert.

Players can play any investigators from the integrated first edition products, and the app can use any of the monsters or map tiles from those products during the game.

1 Space: An area of a map tile separated from other spaces by borders, impassable borders, walls, or doors.

2 Border: Represented by a solid white or yellow line. Borders divide large areas into multiple spaces. Investigators and monsters can move through borders.

3 Impassable Border: Represented by a white or yellow dashed border. Investigators and monsters cannot move through impassable borders unless an effect specifically allows it.

4 Wall: Represented by a brown border. Investigators and monsters cannot move through walls unless an effect specifically allows it.

5 Door: Represented by a rectangular gap in a wall. Investigators and monsters can move through doors.

6 Room: A group of spaces separated from other rooms by walls, doors, yellow borders, yellow impassable borders, or the edges of map tiles. Each room has a single name that refers to all spaces in the room as a group

Mansions of Madness is played over a series of game rounds. Each round consists of two phases that are resolved in the following order:

After the mythos phase each round, investigators start a new round beginning with the investigator phase. Players continue resolving game rounds until they have won or lost the game.

These phases are described in detail on the following pages and summarized on the last page of the Rules Reference.

The investigators take turns in the order of their choice. On an investigator's turn, he performs up to two actions of his choice. Then the next investigator takes his turn, and so on, until each investigator has taken a turn.

The investigator moves his investigator figure up to two spaces, moving one space at a time, from one space to an adjacent space. He cannot move through walls or impassable borders unless an effect specifically allows it.

If an investigator attempts to move out of a space that contains a monster, he must first resolve an evade check.

The investigator uses the app to explore an adjacent room.To do so, he taps the Explore token that corresponds to the area he wants to explore. Then he confirms his action by selecting the "

The investigator resolves the effects as instructed by the app.The effect indicates which map tile or tiles to place as well as any Search, Interact, Person, or other tokens.

After all tiles and tokens have been placed, the investigator may move into the explored area as instructed by the app.

The investigator uses the app to search something of interest in his space. To do so, he taps a Search token in his space. Then he confirms his action by selecting the "^ Search" option.

The investigator resolves the effect as instructed by the app which might include a skill test, declared as a skill icon embedded in parentheses following a short narrative.

For example, "You dig through the dense paperwork cluttering the desk, looking for anything of interest (

)" instructs the investigator to test his observation (

Using The App To Perform Actions

Performing the explore action, search action, interact action, and some component actions requires using the app. An investigator may tap any token in the app to inspect it. Doing so does not require an action, and an investigator can inspect a token even if the token is not in his space.

) unless he spends an action to do so. Performing the explore, search, or interact action allows the investigator to select such an option.

The investigator uses the app to interact with a person or object in his space. To do so, he taps a Person or Interact token in his space. Then he confirms his action by selecting an option preceded by the action icon (

The investigator resolves the effect as instructed by the app which might include additional decisions or a skill test.

Component actions on cards are preceded by the word "Action" in bold and can be performed by the investigator who has that card.

). The investigator resolves the effect as instructed by the app.

The investigator uses the app to attack a monster. To do this, he selects the monster that he wants to attack from the monster drawer 1. Then he presses the "Attack" button 2.

Attack with a Heavy Weapon", "

Attack with a Bladed Weapon", "

Attack with a Firearm", "

After selecting his attack type, he resolves the effect-which often includes a skill test-as instructed by the app. The investigator uses the "+" and "-" buttons in the monster menu to record the damage the monster has suffered 4.

Some effects, such as ranged attacks, horror checks, and monster effects, rely on range. The maximum range of these effects is three spaces. Range cannot be counted through walls or doors unless an effect specifically allows it.

After all investigators have taken a turn, one of them presses the end phase button in the bottom-right corner of the screen to end the investigator phase and proceed to the mythos phase.

Carson Sinclair uses the attack action to attack a Deep One in his space.

During the mythos phase, the app generates a number of effects to be resolved by the investigators. There are three types of effects that the app can generate-mythos events, monster activations, and horror checks. These effects are described in the following sections.

The investigators resolve the effects as instructed by the app.

After all mythos events for the round have been resolved, the app will generate instructions for activating monsters. If there are no monsters on the board, the mythos phase will end automatically instead.

After all monsters have activated for the round, the app will instruct investigators to resolve horror checks.

During the mythos phase, the app opens the monster menu and generates the effects of each monster's activation.

The app instructs each investigator to resolve a horror check against a single monster within range.

To resolve a horror check against a monster, the investigator selects the monster from the monster drawer and resolves the effect as instructed by the app.

After all investigators have finished resolving horror checks, one of them presses the end phase button in the bottom-right corner of the screen to end the mythos phase and begin the next round, starting with a new investigator phase. 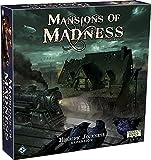 Mansions of Madness Second Edition: Beyond the Threshol