It is 1821, and. for 250 years the Philippine Islands have been under the thumb of the Spanish crown. In the shadow of the colonial power, self-willed, natives have established, secret maritime trade with the Asiatic mainland.

Using odd-looking punts and. fragile bamboo barks, these black market traders cram their boats with nutmeg, silk, jade, and. ginseng, and. set sail to smuggle them into MANILA. Success in each venture is uncertain, as the seaworthiness of both boats and. captains is poor. To add. to their woes, pirates lie in wait to plunder boats that cannot escape them.

Given all this, it is not surprising that wares that reach the black markets in MANILA command, high prices, making the venture worth the risk for those who succeed.

The black market dealers use accomplices to ensure they get the wares, bribe pilots to aid their cargoes and hinder others, and. insure their cargoes against failure. And. a few wealthy merchants hire pirates to attack the black market boats and. secretly pocket the profits from these raids.

While the players speculate about success and failure, the ultimate fate of the ships will be determined by the dice.

There are four shipments that need to get to Manila - jade, ginseng, silk and nutmeg. A round begins with an initial auction to become harbor master. If you win, you'll be allowed to buy a share of one of the shipments, choose which three shipments you'd like to take down river and how likely they are to make it to their destination in the harbor.

If they make it to Manila, their share price will increase. The aim of the game is to bet on the outcome of these shipments, with dice ultimately determining their fate. How many of the three boats will make it and which ones?

Would you like to provide insurance against possible failed ships or perhaps you think pirates will snatch a chance to take control? Manila is a fun family game that takes minutes to learn and brings the river boats of the Philippines to life! The office is important, as only the harbor master can decide which wares will be loaded and where the punts will sail from, giving some advantages over others. The harbor master is also the only one able to buy a new share as an investment in the future. … 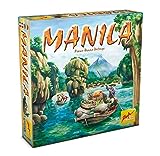 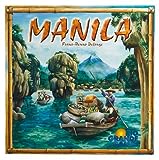 Manila: How to Play