Earn points for guessing the correct translation, and also earn points when other players vote for your made-up translation.

The player with the most points after 10 rounds wins the game.

Place the box of cards within easy reach of all players.

Choose one player to be the Scorekeeper, and give them the Score Pad. Give each player a pencil and one sheet from the Answer Pad.

Make sure each player writes their name on their answer sheet. The answer sheet is double-sided (hence 10 rounds per game).

There are 3 kinds of cards in this game, and players will be asked to provide 3 different kinds of made-up answers.

Choose a player to be the first Editor (perhaps the player who knows the most languages).

For Picture Cards, lay the card down on the table for all players to see.

Players use their answer sheets to create funny, clever, or accurate translations.

While the rest of the players are creating their witty replies, the Editor must write the official translation on their answer sheet.

(The Editor does this in case another player sees them reading an answer off a card - rather than from the answer sheet - which would make it easy to spot which was the official translation).

After players have had an opportunity to craft their answers, all answer sheets are handed to the Editor.

The Editor now reads all the replies aloud. It is important to read all the replies with equal authority as if all have an equal opportunity of being the official translation.

Stumbling over unreadable or unknown words will let the rest of the players know which answers the Editor did not write (if the Editor has an issue with a response, they should ask that player to step aside for a conference, before reading any answers aloud).


Note: If two players have answers that are very similar, the Editor should only read one answer (and split any votes it receives between the two players). This may result in half points.

However, their answer is not read aloud and they do not get to participate in guessing. Other than this, the round is played as normal.

Once the Editor has read all the responses aloud, players guess which answer is the official translation. Players guess one at a time, beginning with the player to the left of the Editor. Players may vote for their own translation, but this earns them no points.

As each player chooses which answer they like, the Editor should record on each player's answer sheets who guessed what. Write the initials of each player beside the answers they voted for.

Once all the players have voted, the Editor shares which answer is the official translation. The Editor also selects their favorite answer (usually the most humorous answer).

The Editor then works with the Scorekeeper to record the score of each player for that round. Once scoring is complete, the answer sheets are returned to the players and the role of the Editor moves clockwise around the table.

After 10 rounds, the player with the most points wins the game.

In order to have more answers to choose from, in 4 player games, the Editor can create an answer as well as record the official translation.

At the beginning of the game, simply add an extra answer sheet to the game, and label it "The Editor". This is where the translations off the back of the cards will be recorded.

This Answer Sheet should travel around the table with the role of Editor. Of course, the Editor still cannot vote in a 4 player game. 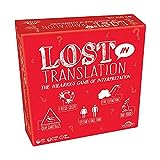