Every question card has a letter on the back. To win a letter you must be the first person (or team) to shout out the correct link on that card. Win enough letters to spell LINKEE and you've won the game.

One person must volunteer to be the Question Master (QM). Don't worry about being the QM, it's good fun because you get to boss people around. Everyone else splits into teams.

Some people play with an alternating QM, with each team taking turns reading the questions.

Each team grabs a pencil, paper & Trading Rules card. Teams can also look at a few question cards before they start, to get the hang of things.

The Question Master draws the first question card and shows all teams the letter they are playing for. The QM reads Q1 on the card and all teams write down the answer, if they know it.

At any time a team can shout Linkee and guess the link. (You can guess as early as Q1 if you are brave enough.

Once a team shouts LINKEE! they must answer. (No backing out even if you're really, really sorry). If you answer before shouting Linkee your answer doesn't count.

Shout the right link, however, and win that card. Shout the wrong link and your team is out until the next card. If there is only one team left in the game at this point, that team gets all the remaining questions and clue read to them.

If, after all four questions have been read out, no team is able (or willing) to guess the link, the question master reads out the clue.

All teams still left in might as well try guessing now - nothing to lose. If no team gets the Linkee right, the question master draws a new card.

Win more letters than you need and you can trade them in to the question master for a bonus move. (The only time you can't trade-in is when another team is answering the link).

Linkee is best played with three or more people, but you can still have a nice little game with two. The rules are the same as above except both people are QMs and players at the same time.

If Alf or Bert guess wrong, they're out until the next card & the other player gets a free run at his card. The first person to spell Linkee wins. (Our money is on Alf. He's good). 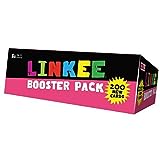