To Help Jack The Ripper

On each of the second, third, and fourth nights, Jack the Ripper can use one Jack's letter to change the position of the police patrols. A letter can only be used after the police patrol tokens have been placed.

Once a given letter is used and its effect applied, that letter is removed from the game. Another letter cannot be used until the next night. Three of the letters (Dear Boss, Saucy Jack, and From Hell) are played during the hell phase 3, "Police: Patrolling the Streets".

The remaining letter (Goulston Street) is played during hunting phase 1, "Jack the Ripper: escape in the night".

These are the effects of each letter:

Jack moves a police patrol token (without looking at whether it is marked) from the a/a or c/b section of the game board to any unoccupied yellow-bordered crossing.

Jack chooses two police patrol tokens from the B/a or B/b sections of the game board. the head of the investigation moves both of them to any other unoccupied yellow-bordered crossings.

Jack moves a Police Patrol token (without looking at whether it is marked) from the a/b or C/a section of the game board to any unoccupied yellow-bordered Crossing.

This letter represent graffiti rather than an actual letter. It is played during the hunting, immediately after Jack has moved in phase 1, "Jack the Ripper: Escape in the Night", but before any of the Policemen move in phase 2, "Police: Hunting the Monster".

When Jack uses this letter, Jack chooses either the red, green, or blue Policeman pawns. Then, the head of the investigation selects either the chosen pawn (which represents the metropolitan police) or the brown pawn (which represents the City of London Police) and must immediately move that pawn to goulston street, which is indicated by the red-bordered Crossing at a5/b8.

For every five yellow clue markers he reveals to the police during a given night, Jack gains a blue False clue marker.

Jack can place one of these False clue markers on any numbered circle at the beginning of phase 3, "Police: Clues and Suspicion". When placed in this way, a False clue token blocks that numbered circle for the rest of the night, meaning that a policeman pawn cannot look for clues or execute an arrest there.

To Help the Police

During hunting, phase 3, "Police: Clues and Suspicion" each detective, starting with the head of the investigation and proceeding clockwise, has a third option to choose from for his action: rushing.

Rushing: a detective chooses a policeman pawn that can still act and moves it to an adjacent crossing (ignoring numbered circles).

During phase 3, "Police: Clues and Suspicion", when executing an arrest, the detective announces all of the numbered circles adjacent to his policeman pawn's location. If any of these numbered circles correspond to Jack's current location, Jack is arrested and loses the game. Otherwise, no information is given.

Catch Me, if you Can

I know your Address

If that numbered circle was choosen by Jack as his hideout, the detectives win the game. This ability can be used only once during the game. 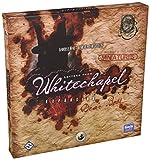