Letter Jam is a cooperative game for 2 to 6 players. In each round, every player has a letter that everyone else can see. But no one can see their own letter!

Players try to find words that can be made with the letters they see. The player with the best clue spells it by marking the letters with numbered tokens. Your letter's position in the clue helps you guess what it might be.

Then you can move on to a new one! Guess them all before clues run out, and unscramble your hidden word.

Players sit around the table so that every player will be able to see 5 letters once the game is set up. The numbered tokens, the setup card, and the wildcard go in the middle.

Start by making a secret word for the player on your right:

Or use the Letter Jam setup app!

Difficulty Level: Shown here is a standard 5-letter game. You can play with 4 letters or even 3, if some players are unsure spellers. Once you have mastered the game, try it with 6 or even 7!

Choose the setup card based on the number of players, and place it in the middle of the table. Place red and green clue tokens on the marked spots.

You receive a scrambled secret word (created either by the app or by the player on your left). You never look at your own letters. Lay them in a row face down in front of you. Place your leftmost letter in the stand, as shown, so that it is visible to everyone except you.

Take a pencil and a guessing sheet. Fold the sheet in half to make a screen so that no one can see the letters you write down during the game.

You always use all six stands. If you have fewer than 6 players, some stands will be nonplayer stands.

Deal each nonplayer stand a stack of random cards from the deck. Place this stack face down atop the clue token. The number of cards in each stack is given by the setup card. After making stacks, put the top card of each stack in its stand so that all players can see it.

Look at the Letters.

At the start of each round, all players can see one letter in every card stand except their own. Look for a word you can spell using the letters you see. The same letter can be used multiple times, even if it is on only one card.

Example: You are sitting in the position illustrated below. You see several possible clues, including HUGS, HOG, and SHUSH. Choose a cluegiver.

Players discuss their potential clues to see who has the best one. You must not give any information about players' letters, so follow the rules at the bottom of this page. Do not talk about a specific player's letter and do not talk about what kind of word your clue is. All players choose the cluegiver together.

Each token on the setup card represents a clue someone can give. When you give your first clue, take a red clue token. If you already have a red token from a previous round, see Counting Clues on page 6.

The cluegiver spells out the clue using the numbered tokens. The first token marks the first letter, the second marks the second, and so on.


Example: "I have a 7-letter word that uses all players' letters and one nonplayer letter. It does not use the wildcard".

Write the clue down.

If the cluegiver uses your letter in the clue, write down the clue on your guessing sheet. Write a question mark to represent your unknown letter.

Keep your guessing sheet hidden so no one accidentally sees their letter on your sheet.

Try to guess your letter.

You should have one or more guesses for your letter. Write them down.

Examples: If you had spelled HUGS, the player with the U might see these possibilities.

But instead, you let your friend give the clue illustrated on the facing page. You see only one possibility.

Decide whether to move on

If you are mostly sure about your letter, tip it over face down. Record your guess in the corresponding box at the bottom of your guessing sheet.

If you aren't sure, you can keep the same letter for the next round. The choice is yours.

Once everyone has decided, those who chose to move on return their cards to their rows without looking at them. You never look at your own cards.

The wildcard can be used to represent one letter. Simply place numbered tokens beside it to show where it is used in your clue. If the letter appears more than once in the word, you use the wildcard multiple times.

However, you cannot use it to represent two different letters in the same word. The cluegiver is not allowed to say what letter the wildcard represents.


Setup for Next Round

All players who chose to move on get new letters. Whenever you return a letter to your row, move your stand one space right and give it the next letter.

You must progress from left to right. Once you move on from a letter, you can never return to it.

If a nonplayer stand is used in the clue, discard its letter and draw a new one from its stack. (Details are on the next page). Once players start taking new letters, return all numbered tokens to the center of the table.

The tokens on the setup card represent the clues you can give. You always take a token when you give a clue.

With 4, 5, or 6 players: Take a red token when you give your first clue. If you have already given one, take a green token whenever you give a clue. Initially, the only available green tokens are those on the leaves. If none are left, you must choose a cluegiver who can take a red token - that is, a player who has not yet given a clue.

When all red tokens are gone, everyone has given at least one clue and your team is rewarded - the green token in the center of the flower becomes available.

The game always uses 6 stands, so each player will always see 5 letters. Cards in nonplayer stands can be used in any clue, just as if they were players' letters.

At the end of the round, a nonplayer stand discards its letter if it was used in the clue. (Discards can go in the box). Give it the next card from the top of its stack.

When the last card in the stack is drawn, the green clue token is revealed.APlaBce it on one of the leaves of the setup card. Your team has earned one additional clue. Once its stack is empty, the nonplayer stand draws its new cards from the deck in the middle of the table.

Late in the game, some players will run out of letter cards. If you return your last card to your row, draw a new one from the deck. Place your stand in front of your row to show you are done with your original letters.

When someone uses this extra letter in a clue, you can try to guess it. State your guess out loud, then look at the card. If you guess correctly, it becomes a bonus letter. Place the bonus letter near the wildcard. (If you guess wrong, discard it).

Whether you guessed right or wrong, draw a new letter from the deck. There is no limit to the number of bonus letters your team can have.

If multiple players are guessing for bonus letters, they may guess in any order. Non- player stands cannot make bonus letters.

A bonus letter can be used to help spell a clue as though it were a letter in a nonplayer stand. After it is used in a clue, discard it. Bonus letters can also be used at the end of the game.

There are two ways the game can end:


Look at your guessing sheet and try to spell a word.

You should have a guess for each letter in your row. Hopefully, these letters can be rearranged to spell a word. When you think you've figured out your word, write it down.

Keeping cards face down, rearrange them to spell your secret word.

Tip: Some players find it helpful to mark their cards with the numbered tokens before moving them.

You can use bonus letters or the wildcard to help.

When trying to spell a word, any of your letter cards can be replaced by a bonus card or the wildcard. Simply place it face up on top of the card you want to replace. You can use more than one of these cards from the middle of the table, but no card can be used by more than one player.

Note: You can also use bonus letters or the wildcard to help make a longer word than the one you started with. In the optional scoring system on the next page, this gives you 1 point for each extra letter.

Everyone reveals their word.

Take turns. We recommend starting with the players who are most sure of their words.

You don't have to spell the word you were given. If you were given HORSE, you can spell SHORE. You can use a bonus E to spell SHEER or even HEROES. Your goal is just a correctly spelled English word whose meaning you know without looking it up. And it counts even if you thought you were spelling something else.

All players share in the victory equally. Of course, the goal is for everyone to correctly spell a word, but it's hard to play a perfect game. If you get close, that's close enough.

If you like, you can count up your Letter Jam score. Incorrect words score 1 point for each of the original letters guessed correctly. For each correctly spelled word:

Example: If you were given HORSE and you used a bonus E to spell HEROES and your team has 2 leftover green tokens, your word gives the team 15 + 1 + 2 = 18 points.

The back of the setup card shows you how sweet your victory is: 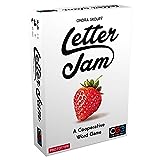