Win the most points by the end of the game.

Each player chooses a color and collects the marbles of that color. The 17 wooden tiles are placed edge-to-edge to form the game board. For example, players can make either:

Red's first move in the game.

Red must play along the axis that intersects where black played his last marble (rule 1), but not on the same tile (rule 2) AND not on the tile last played by red herself (rule 3).

Note: A line of marbles may contains gaps.

The game ends when all marbles have been played or when a player cannot play their next marble (i.e., both the horizontal and vertical spots where the player must play their marble are full, or the move is otherwise forbidden according to the game rules).

To facilitate the counting of the points, players can dismantle the board. Each player collects the wooden tiles where their color prevails. The tiles that have the same number of black and red marbles are put aside and do not count. 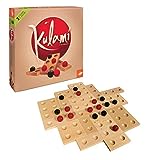