Many moons have come and gone since your boats departed on the journey to Karuba. Once you arrive on the island, each player will lead an expedition team of four adventurers. Now you just have to navigate your way through the dense jungle to make it to the temples.

"Just" may be something of an understatement; the ancient jungle trails have to be found and uncovered first! Hurry up and be the first to reach the temples to collect the most valuable treasures.

Many paths have dead ends and you need to be patient to find the right/best way (through the jungle).

Look! A gold nugget! You can pick it up and collect it, same applies to the shiny crystals along the paths.

The expedition team with the most valuable treasures wins.

Players take an island each and place it in front of them. In addition, every player will receive the following:

In front of each temple there should be as many temple treasures as there are players. Depending on the number of players take treasures with the following values:

Create a face up stack for each treasure color (4 stacks in total), and place the stacks in the middle of the table, sorted in descending order of value. Place the other temple treasures back in the box.

Place the crystals and gold nuggets somewhere, easy to reach, in the middle of the table.

Before each game, players cooperatively decide where to place their adventurers and temples.

Miriam places the yellow adventurer at go degrees on the beach and the yellow temple at 10 degrees in the jungle. Her teammates do the same.

Christina places the purple adventurer at 110 degrees on the beach and the purple temple at 60 degrees in the jungle. Her teammates do the same.

Luis is left with the brown adventurer, and he places it at 60 degrees on the beach. He places the brown temple at 70 degrees in the jungle. His teammates do the same.

Draw straws to determine which player will be leader of the expedition. This player shuffles their 36 jungle tiles well, and places them in a face down stack in front of their island. The other players sort their 36 tiles according to the numbers and place hem face up around their island.

Each player plays only on their own island card while racing to beat the other players in the hunt for the most valuable temple treasures. Use the tiles to build paths along which the adventurers move to get to the temple of the same color.

On their way, the adventurers can collect crystals and gold nuggets, which also count as treasures at the end of the game.

The expedition leader reveals the topmost tile of their stack and calls out the number on this tile in a clear voice. All the other players look for this tile in their stockpile at the same time.

You now have two options of what to do with this tile (Options A & B described below). Once each player has performed option A or B, then the expedition leader uncovers another tile, etc.


A. Lay tile on the island

You may only lay tiles on free fields. The tile must be placed so that the number is in the upper left hand corner of the tile.

Tiles do not have to be placed next to other tiles, but placed be laid on any field in the island grid. You may create paths where tiles without paths border each other and thereby lead to a dead end. (See image)

If a tile with a crystal or gold nugget is uncovered, everyone takes the appropriate item from the middle of the table and places it on this tile. At the end of the game you will receive points for crystals and gold nuggets collected by your adventurers during the play.

Tip: Always make sure that an adventurer or temple is not accidentally blocked and thus stranded in a dead end.


B. Discard Tile and Move Adventurer

If you discard a tile, you can move an adventurer. This is how your adventurers collect gold and crystals, and how they reach the temple of the same color.

A step is always one tile forwards. Adventurers may only move along the paths. Only one adventurer may occupy each tile, and leaping over them is not allowed. At intersections adventurers may turn in any direction.

This tile has 3 paths leading to the edge of the tile. A player who discards it can move an adventurer of their choice a maximum of 3 steps along their path.

In order to collect gold nuggets or crystals, an adventurer must finish their turn on the tile in question, and forfeit any additional movement points.

Take the treasure off the tile and place it on the picture of the adventurer to the left of the island map.

Crystals and gold nuggets remain there until the end of the game and are counted as victory points in the final scoring. You do not have to collect gold nuggets and crystals and may pass by them.

Once an adventurer moves to a temple (i.e. to the degree where the temple is), the corresponding player takes the most valuable treasure of this temple color remaining from the middle of the table, and places it in front of them. The adventurer will then stay put at the temple until the end of the game.

If several players reach a temple of the same color in the same turn, each of them receives the same number of victory points: One player takes the most valuable treasure of this temple from the stack.

The others take the less valuable treasures from the same stack, and make up the difference with crystals from the crystal stockpile.


End of the Came

The winner is the player with the most points as scored below:

Gold nuggets and crystals still on the tiles of your islands are not scored as victory points. The player with the highest number of points wins.

In the event of a tie, the winner will be the one of the tied players who has the most jungle tiles on their island. If there is still a tie, these players are joint winners. 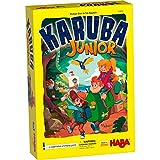