To get rid of all of your cards.

The Deck: There are 3 of each card in the game-number cards that range from 1 to 16 and 4 different Karma Cards.

The Deal: Open and shuffle both decks together

There are 4 different types of Karma Cards, which are like wild cards and can be played at any time. Rules for doubles & triples also apply to Karma Cards.

Give the Pile to a Friend

This Karma Card allows you to give the entire discard pile to any player.

You can even bring someone who has previously gone out back into the game.

This Karma Card can only be used once, be sure to remove it from the pile before giving the pile to your friend.

This Karma Card requires the next player to play a card that is 5 or less OR a Karma Card.

This Karma Card allows you to play a Table Card early. You still must play all Faceup Table Cards before you play your Facedown Table Cards.

If you have a Play a Table Card in your hand, but you're out of Table Cards, you may play another card from your hand instead.

Note: When playing this card, the card you play next can be any number. Also, if you have identical Table Cards you may play them at the same time. For example, if you have two 7s as your Faceup Table Cards, you may choose to play them both.

When this Karma Card is played, take the card at the bottom of the discard pile and move it to the top.

The next player must play on this new top card. If the bottom of the discard pile is another bottoms up or a play a table card, its value is zero and the next player can play any card. 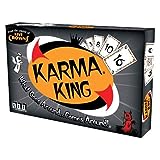 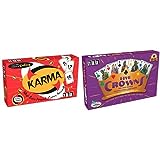