To be the first to construct a dinosaur by collecting all nine bone groups of one dinosaur and to swipe a bone off the table.

Number Of Bones: Place one less bone than players in reach of all players in the middle of the table; return the other bones to the box.

Number Of Cards: Use one complete dinosaur per player plus the FAKE BONE and the paleontologist. There are nine cards per dinosaur. If there are three players, use only three dinosaurs.

If there are four players, use only four dinosaurs. For nine players use the complete pack. Return unneeded cards to the box. Always add the FAKE BONE and the paleontologist cards.

Shuffle the cards thoroughly and deal all the cards to the players in clockwise rotation starting with the player to the left of the dealer.

Each player will then have nine cards of various kinds, except the two players immediately after the dealer who will have ten, one more than needed to go out.

This card can be anything. However, if it is the FAKE BONE card, the player will lose 50 points for having that card. Sort your cards by dinosaur as quickly as possible and decide mentally which dinosaur you want to gather.

Cards must be traded as groups of the same dinosaur (also identified as the same point value) or the same bone structure (same color). The FAKE BONE and the paleontologist can be traded together, with any other cards, or by themselves.

The dealer offers the first trade. You trade cards not wanted, in hopes of getting cards of the dinosaurs you want to collect. While you may trade like bones (same color), your goal is to collect one dinosaur (same point value).

Remember, from the moment the dealer makes the first trade, all players begin to trade simultaneously. There is no waiting for a turn. Trade as quickly and as often as you can.

There are no turns. Take any number of your cards, which must be all the same dinosaur (point value) OR same bone (color), that you wish to exchange, hold these cards face down and present them to the other players (without waiting for a turn). Then quickly 'call out' your offer:

"Trade one! one! one!" or "two! two! two!" or "three! three! three!" (You can trade as many cards as you can match). Continue calling until someone trades an equal number of cards with you. All traders should call out ''ONE! ONE! ONE!", "TWO! TWO! TWO!", or whatever the number of cards they are trading.

Do not show the cards while trading. Keep them face down, only calling the number of cards that you are offering to trade.

Keep on trading with anybody to obtain additional cards of the dinosaur you are trying to collect. Be sure to pass on the FAKE BONE card and only keep the paleontologist if you think you can use him as a wild card to go out.

Do not let go of your cards until you trade with someone with the same number of cards.

When you get all nine cards of the same dinosaur (or eight plus the paleontologist), quietly take a bone from the table. You score whatever point value is marked on the dinosaur plus your bone.

As other players notice that a bone is gone they immediately grab for a bone themselves to get 50 points. After a player takes a bone, that player cannot trade, but can continue to 'call' to disguise the fact that he/she took a bone.

If the player who went out did not use the paleontologist as a wild card, whoever holds it loses 50 points.

The game is won by the first player to score 1000 points. 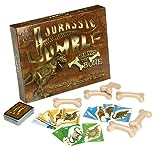