Space Cowboy: Famous ship welcome at every port. You may make a direct delivery from a city adjacent to the junk's destination. You may do this multiple times to different cities in a single turn, if able. Transfer points are considered adjacent to 4 cities.

Interplanet Express: Speedy rocket ship sponsored by Earth. If you launch SOURCE: EARTH junk, you may adjust the distance by +1 or -1. Your junk and ship must still travel an equal distance. If you launch a "1" junk tile, you may reduce that to "0" and stay in place for that turn, picking up junk from your current city.

Time Booth: Whoa. It's smaller on the inside. Your ship may change direction of travel when switching to a new orbit. Think of it as doing a U-turn. In other words, if you would normally be traveling clockwise after the switch, you may choose to travel counter-clockwise instead, and vice versa.

Century Fly: The garbage will do. You may pick up junk from 1 adjacent city instead of your current city. Transfer points are considered adjacent to 4 cities.

Puddle Jumper: Slow and steady. Well, slow anyway. When your ship moves, you may move it a distance of exactly 1, regardless of what you launched. You must still launch junk to move, sending it away its normal distance. If using this power, other distance modifiers do not affect your ship's distance.

You can play with any or all of the Night sides of the location boards and "B" sides of ship cards.

The Night sides add a little more crunch for an advanced experience. The ship power "B" sides are more directly interactive - approach with caution!

Necktie Fighter: Don't get cocky! When an opponent hits you, their ship is also hit. When you hit an opponent's ship on your turn, they must discard 2 junk tiles instead of 1.

Planetary Defender: Stalwart protector of our home planet. Junk tiles of values "1" or "2" cannot hit your ship. Your ship may still be hit as a result of the Jolly Roger or Necktie Fighter ship powers.

Splendor #2331: Stars in my pocket... Pick up any junk that hits you. When you hit an opponent's ship, pick up the junk they discard. If junk that hits your ship would have been delivered, instead put it in your cargo.

Jolly Roger: Yarr! A most fearsome pirate ship. When your ship passes through or stops at a city with an opponent's ship, their ship is hit.

Each destination after the sixth adds another +1 to your final score. (Cities on Phobos and Deimos are also considered Mars destinations).

Phobos: Martian junk has unpredictable value. Wanna gamble? When you pick up junk from Mars, Phobos, or Deimos, you may choose to pick up a random junk tile from the Mars stack instead. (If you choose this, you only pick up 1 random junk tile, no matter how many junk tiles are on your current city).

Deimos: MarsTech warp gates make travel more flexible! When you launch/move from cities on Mars, Phobos, or Deimos, you may adjust distances by +1 or -1. Your ship and junk must still travel an equal distance. 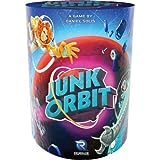