Each card has a combination of words on the front that, when recited out loud, sounds like the phrase written on the back.

For example, try reciting "thirds teeth or stay" out loud. Can you hear the hidden phrase? Listen closely... you've been saying "thirsty Thursday".

The game is simple: compete to decode the phrases before the timer runs out.

The cards are broken up into 3 categories:


Each round lasts for 60 seconds or until 3 cards have been decoded-whichever comes first!

One person is the designated JUDGE each round. The JUDGE starts the round by flipping the timer and holding up the front of the card.

Everyone else is a TRANSLATOR. The TRANSLATORS read the front of the card aloud. Whoever decodes the phrase first wins the card.

Having trouble? The JUDGE is allowed to reveal 1 hint (found on the back of the card) per round.

When the card has been decoded or the TRANSLATORS have elected to pass, the JUDGE pulls the next card.

Once the timer runs out or 3 cards have been decoded, the round is over, and the next TRANSLATOR (rotating counter-clockwise) becomes the JUDGE.

The first player to decode 13 cards is the winner.


Split into 2 teams. Follow the instructions for Free-for-All, except instead of playing to 13, each team will play three rounds. Whichever team has decoded more cards at the end wins.

If both teams are tied after 3 rounds, each team nominates 1 TRANSLATOR for a sudden death tiebreaker.

Whichever TRANSLATOR decodes the card first wins the game for their team! 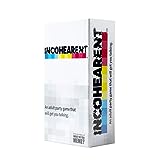