Imhotep was the first and most famous master builder of ancient Egypt. He is considered one of the earliest polymaths in the history of humanity. For example, he is said to have been responsible for building the very first pyramid in Egypt - the Pyramid of Djoser in Saqqara. Can you match his accomplishments in creating monuments for the ages?

You will need ships to transport blocks of stone to various building sites. But you will not be the only one making decisions about where to send the ships and their cargoes. Your opponents will have their own plans and will try to prevent your success.

A fierce competition will unfold over the most valuable stone shipments. It will take clever tactics and a little luck to achieve success.

Each player assumes the role of an Egyptian master builder. You will have 6 rounds to transport your stones to the various sites and to erect monuments in such a way that you earn the most points. Whenever your turn comes up, you will select one of the following 4 action options:

Place the 5 site boards in the center of the table as shown in the illustration. All site boards have an A side and a B side. In your first few games, use the A side. You can use the B sides in later games as a variant to the standard game play. So be sure that the A sides of the boards are showing in your first game.

Place the scoring track board to the right of the site boards. Use this to keep track of all players' points. Have the 8 ship tokens ready above the boards.

Use the 7 round cards with 3 heads on them in a three-person game.

Use the 7 round cards with 4 heads on them in a four-person game.

Each player chooses a color (black, white, brown, or gray) and gets a supply sled token in that color. With fewer than 4 players, the unused supply sled token(s) and stones of the unused color(_) go back in the box. All of the stones go in a pile to the right of the site boards, forming the stone quarry.

The game is played over 6 rounds.

Course Of A Round

Each round proceeds as follows:

Each turn goes as follows:

The player whose turn it is must carry out exactly one of the following 4 actions:

Each player takes action in turns and always performs exactly one action per turn. Each player's turn will come up several times per round. The round does not end until all 4 ships have been sailed to the various sites.

Important: Since there are only 4 ships available per round, there will always be 1 of the 5 site boards that will not be sailed to in each round!

When all 4 ships have been sailed to the sites, the round ends immediately.

Now the temple is assessed. Each stone visible from above yields 1 point. In other words, stones covered by other stones no longer yield any points.


Prepare for the next round

The next round begins.

The game ends after 6 rounds.

Then the final point assessment, or scoring, takes place.

Start by assessing the stones in the burial chamber. The point assessment is explained on page 7 under the "A) Burial chamber" heading.

Then it is time to assess the obelisks. Their point assessment is explained on page 8 under the "A) Obelisks" heading. The decoration and statue market cards yield points in accordance with what is printed on them. Unused blue market cards yield an additional value of 1 point each.

In case of a tie: The player with the greater number of stones on his or her supply sled token is the winner. If this is also a tie, the tied players share first place.


Variant: Wrath Of The Pharaoh

If you want to play with somewhat "harsher" rules, you can try the following rule variation:

You are punished if you fail to participate in the building of all four monuments.

Any player who has not delivered at least 1 stone to each of the four building sites - pyramid, temple, burial chamber, and obelisks - by the end of the game must have 5 points deducted from his or her score. 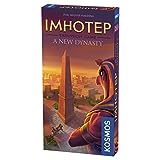