Hoax is a game for three to six players, each of whom seeks to inherit the fortune of a famous tycoon.

Player identities are secret, so players must use their skills of deception and deduction to impersonate other roles while at the same time discovering the identities of the other players in order to eliminate them. The last remaining player wins the game.

During a game of Hoax, each player attempts to discover the other players' identities while keeping his identity a secret. To accomplish this goal, a player performs actions to collect resources.

Then, the player spends these resources to discover information about other players so that he can eliminate them.

Hoax is played over a series of turns. During the active player's turn, he performs one or more actions. Starting with the first player and proceeding clockwise, players continue taking turns until one player wins the game.

During a player's turn, he can perform the following three actions in any order:

Claim: The player declares that he is a character and uses that character's ability, known as a privilege.

During a turn, a player must perform one claim action, may perform any number of investigate actions, and may perform only one accuse action.

Some characters also have an immunity, which is shown on the reference sheet. Players should become comfortable with the basic rules presented in this section before playing with immunities.

To perform a claim action, a player declares that he is one particular character. To do this, he uses the phrase "as the" or "I am the" when making this declaration. For example, when a player claims to be the Gardener, he says, "I am the Gardener" Then, he uses the Gardener's privilege.

Each character has at least one unique privilege (see "Privileges" on page 8) shown on each reference sheet. Each privilege allows a player to acquire resources to pay for investigations.

There are three types of resources, each of which is represented by one of the following resource tokens:

When a privilege instructs a player to take a resource token, he takes that token from the supply, unless specified otherwise.

Example: During Anne' turn, she decides to claim to be the Butler. Anne says, "I am the Butler, so I'll take some cash. Ben, you help yourself to a token" Anne takes one cash token from the supply. Ben takes one prestige token. Anne has performed the Butler's privilege, and her claim action is complete.

A player can claim to be any character, regardless of his identity. However, if a player is claiming to be a character other than the one that corresponds to his character card, he is making a false claim.

If other players believe that the active player is making a false claim, they can call him out and attempt to label him as an imposter.

The investigate action allows a player to discover information about another player's identity.

To perform an investigate action, the active player must spend one of each type of resource. To spend a resource, a player takes that resource from his play area and places it in the supply.

After spending resources, the active player declares another player as the target of his investigation. The targeted player must use the suspicion deck to provide a clue about his identity to the active player.

He looks at the four cards removed from the deck, but he cannot reveal them to the other players. After looking at the cards, he shuffles them and passes them facedown to the active player.

The active player looks at the four suspicion cards that were passed to him, one of which is the targeted players identity; he cannot reveal any of these cards to other players. After examining the cards, the active player shuffles them back into the suspicion deck and places it in the center of the play area.

The active player can perform an investigate action multiple times during the same turn if he has enough resource tokens to spend; he may target the same player multiple times per turn.

The accuse action allows a player to guess another players identity.

To perform an accuse action, the active player chooses another player as the target of his accusation and privately guesses that targeted players identity.

To accomplish this, the active player takes the suspicion deck and removes the suspicion card that matches the identity he wishes to guess. Then, he passes that card facedown to the targeted player.

The targeted player looks at the suspicion card that was passed to him. If the card matches his identity, he must respond, "Yes", without revealing his identity to the other players. Then, he is eliminated from the game and his resource tokens are given to the active player. Any imposter tokens must remain on the eliminated players reference sheet.

If the card does not match the targeted players identity, he must respond, "No". Then, the active player is eliminated from the game and returns his resource and imposter tokens to the supply.

After performing the action, the eliminated player shuffles all suspicion cards and places the suspicion deck back in the center of the play area. The active player can accuse only one player during his turn. Any player who is eliminated cannot reveal his identity.

During Sarah's turn, she decides to investigate Bill. Sarah spends one cash, one prestige, and one evidence token by taking them from her play area and placing them in the supply 1.

After Sarah has paid for the investigation, Bill takes the suspicion deck 2 and secretly removes "The Son-in-Law" card-Bill's identity 3-as well as three random cards 4.

During each claim action, another player may interrupt that action by calling hoax. To do this, the player says, "Hoax!" aloud and places the hoax card in her play area.

After any discussion, all players except the active player must participate in a vote.

When the players are ready to vote, each player except the active player raises a hand above the play area and makes a fist. Then, the player who called hoax says, "Vote", and each player simultaneously makes either a thumbs-up or thumbs-down gesture.

The player who called hoax concludes the vote as follows:

If the active player was making a false claim, he takes one imposter token and places it on the character name on his reference sheet that corresponds to the character he was falsely claiming to be.

His claim action ends without completing the privilege (or immunity), and he cannot claim to be that character for the remainder of the game. Then, the game resumes as normal.

Example: During Jessica's turn, she decides to claim that she is the Son-in-Law, whose privilege allows her to name a resource type and then take one of that resource from each other player.

Baxter believes that Jessica is making a false claim, so he takes the hoax card and places it in his play area. Then, he says, "Hoax!"

The game pauses while all players debate whether or not they think Jessica is making a false claim. After a brief discussion, the players decide it is time to vote. Baxter says, "Vote", and all players simultaneously make either a thumbs-up or thumbs-down gesture.

Baxter tallies the votes and the majority of them are thumbs-down gestures. Jessica concludes the vote by declaring that she was making a false claim.

She places an imposter token over the "Son-in-Law" name on her reference sheet, preventing her from claiming to be the Son-in-Law again this game. She cannot complete the Son-in-Laws privilege, and her claim action ends.

Players continue taking turns until the game ends in one of the following two ways:

At the end of the game, all players flip their character cards faceup to reveal their secret identities and return their resource and imposter tokens to the supply. 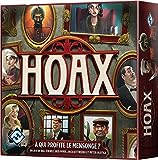