Quickly write down a list of items in a chosen category. Then roll the HIT or MISS die. If you roll a HIT, score points for picking an item on your list that you think other players also wrote.

If you roll a MISS, score for choosing one that you think only you wrote. The player with the highest score wins the game.

Give each player a pad of paper, pencil and one HIT or MISS card. Place the categories card box, die, and timer in the middle of the playing area. Designate one player as scorekeeper and write all players' names on the left side of the score pad.

Hit or Miss is played in rounds equal to the number of players.

A different player acts as the Leader for each round. The Leader draws a card from the categories box and reads it aloud to the group. Another player starts the sand timer.

As soon as the timer is turned, all players quickly write down as many items as they can think of that fit the category. When the timer runs out, everyone must immediately stop writing.

Starting with the Leader and moving to the left, each player takes a turn rolling the HIT or MISS die and following one of three possible outcomes:

Note: In a 3 or 4 player game, each player takes two turns.

The game ends after each player has had one turn as Leader. The player with the most points wins.

Note: In a 3 or 4 player game, the game ends after each player has been the Leader twice. 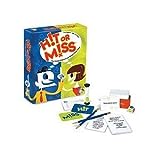