Helvetia - Before the game

Before The First Game

Gently remove the cardboard tiles from their sheets. Attach the 'child' stickers on the underside of each villager figure.


The tiles with letters on the back are openly displayed and distributed to the players (see "Distribution of starting buildings").

The third taking round is started by the starting player again, in clockwise order. Each player may chose a single building type only once during setup. Once all players have chosen 3 buildings, the remaining starting buildings are put back in the box.

Each player now arranges his 3 buildings around his Village Center (see next page Construction of your village).

If you want to play against Swiss tradition, you can - of course - play in clockwise order. If you decide to do so, the distribution of the starting buildings should be done in reverse order. So, beginning with the starting player, first round anti-clockwise and so on.

Special case: It is possible that the last player to take his 3rd building can only choose a building that he has already taken. In that case, this player takes 1 building already chosen by another player, so that he has 3 different building types.

The player from whom the building was taken, then chooses a new building from the remaining ones.

If you play Helvetia for the first time, we recommend using a simplified distribution of the starting buildings. On the back of each Village Center tile there are letters.

Each player receives one Village Center randomly and takes the starting buildings with the corresponding letter.

Put the remaining starting buildings and Village Centers back in the box. Choose a starting player randomly.

If you want to play a faster, learning game, remove the 5 character tiles. Put them back in the box and ignore all rules that concern these tiles.

Apart from that, there is only one other change in the rules: because there are no character tiles, there are less victory points available, and therefore the game ends if one player reaches 18 instead of 20 victory points

In later games, if you want to distribute the starting buildings via the Village Centers for a faster game start, we recommend to use the character tiles and to play to 20 victory points.


Construction of your Village

Each player starts with his Village Center and 3 buildings.

The three buildings that the player receives at the beginning of the game, can be placed anywhere provided they obey the above placement rules. (It is recommended however, to place them all in one quarter of the village).

Each player takes 3 women and 3 men from his supply of villagers. The villagers are placed in couples as follows:

1st pair: On any two of that player's buildings.

3rd pair: 1 villager is "married" by being placed in the village of the neighboring player to his left, in a building containing a villager of the opposite sex. The remaining villager is put on his own Village Center.

All villagers are awake at the beginning of the game, and so the figures stand upright.

The other villagers remain as stock in front of the players. 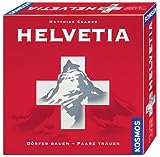