When a player starts his turn on one of the position spaces, he compares his position in the race with the large numbers on the space. If his position matches one of the numbers in the space, he must take 10 times this number of carrots from the carrot bank.

When a player moves to a tortoise space, he takes carrots from the carrot bank equal to 10 times the distance he moved to reach the space.

When a player moves to a hare space, he immediately rolls the die. He then looks up the action he must execute in the die result table using the die roll and his race position. He then executes the required action. 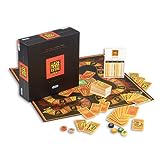