Be the player with the most Free and/or Protected Gubs in play when the final letter of the word G-U-B has been drawn from the deck.

Whoever suggested the game selects the starting player, and play proceeds clockwise. On your turn, proceed through the following steps:

The game ends immediately when the third Letter card is drawn. The winner is the player with the highest total of Free and Protected Gubs in play.

Example of a game in play

Deck and discard pile, placed between all players.

Two letter cards are out, which means the game is almost over.

Notice above that there are five main types of cards:

1 GUBS enter play face up in front of their owners.

2 BARRICADES go on top of Gubs to make them "Protected".

3 TRAPS are placed over Gubs in play and remain there until they are destroyed. Any "Trapped" Gubs at the end of the game do not count for points.

4 TOOLS help your colony while 5 HAZARDS are used to attack or steal from opponents.

Both are discarded upon use. 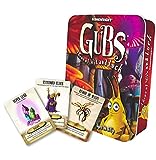