Werewolves bite villagers, villagers poke each other with pitchforks, and everyone betrays everyone in this outrageous card game!

4-10 players (up to 15 with more cards) all claim to be innocent villagers, but one of you is Wolf Zero, the original werewolf that intends on turning the whole town wolfy....

The deck of cards sits face-up in the middle of the table. One by one you take turns picking up the top card and giving it to whichever player you want.

3 Wounds kills either a human or a werewolf. 3 Bites turns a human into a werewolf, and only wolves can pass Bites at night.

When the deck is exhausted at the end of the third night, Wolf Zero begins to GROWL and slowly other wolves (even dead wolves) join the growl! If any humans are left alive, all humans (even dead ones!) win. If all the players who are still alive are growling, all wolves win! Werewolves are among us... and humans who get bitten three times turn into wolves themselves! 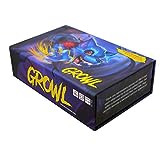