In Godtear, players take command of a warband made up of champions and their followers, and attempt to gain victory in a scenario-based battle.

During each turn, players compete to influence the momentum of the conflict by carrying out heroic actions, allowing them to gain the upper hand. This is represented by the turn token moving one or more steps on the Battle Ladder, which shifts dynamically back and forth between each player.

In the plot phase

of each turn, warbands focus primarily on getting into position and setting up their game plan for the turn.

In the clash phase

of each turn, warbands implement those plans with brutal attacks against enemy models.

At the end of the turn, the player with the turn token in their side of the battle ladder wins the turn and gains the number of victory points shown on the back of the current turn token. Turns increase in value as the action intensifies with a mighty clash, and then taper off again as the fighting nears its conclusion.

Don't get too comfortable with the plan-then-execute dynamic of the plot phase and clash phase. Some champions and followers shake things up with a unique play style.

Champions are divided into four distinct classes, and each class gains a bonus step for one of these accomplishments.

excel at eliminating followers, and gain a bonus step when they knock out an enemy follower.

can manipulate objective hexes to find a foothold for their banner, and gain a bonus step when they make a claim action. Lastly, Guardians

protect the hexes around their banners, and gain a bonus step for keeping their banner in play until the end phase.

Champions constantly seek out more godtears to enhance their power. When they find a godtear, they mark the crystal as their own using some sort of totem or standard collectively called banners.

Placing a banner and keeping it standing is just as important as knocking out enemy models when it comes to winning a game of Godtear!

Godtear is a game played between two warbands of equal size. Before the game begins, players agree on the size of their warbands, with one to four champions and their followers on each side.

If you're new to Godtear or tabletop games, we recommend starting with just 1 champion and their followers so you can learn the basics. Once you're more familiar with the rules we recommend moving up to games with 3 champions on each side, which is a standard-sized game that will last about an hour.

Once you've agreed a game size, simply select your champion(s), then gather their cards and muster their followers. Although there are plenty of champions to choose from, it's entirely possible both players will want to use the same champion(s) during a game.

Each player should also take one dashboard for each of their champions. Place the cards for each of your champions on a different dashboard to make it easy to find the information you need.

When deploying their warbands, players follow the steps below. To deploy a model, simply place it in one of the deployment hexes shown in your chosen scenario. When deploying small followers, up to three followers from the same unit may be placed in one hex.


Example of a Completed Setup:

There are three model types in Godtear. Champions are unique and powerful heroes of your warband. Followers are groups of one to six models per champion representing forces that a champion has attracted to their service.

Banners allow a champion to stake their claim to a godtear and begin to absorb its power. The information required to use each champion and follower is shown on its cards. Banners do not have stat cards but are critical to a warband's victory as explained in 'Overview'.

The first card for each champion shows the champion's stats and has two distinct sides.

3 This shows that this card is for a champion.

4 The phase that this side of the card is used in.


The second card for each champion shows the champion's traits, abilities they have throughout the game. The front side of the card also has their ultimate skill, a skill they can use only once during an entire game of Godtear. Once you use a ultimate skill, flip this card over to show that you cannot use it again in the current game.

2This shows the champions origin.

3 This shows the champion's class: slayer

3 The starting and maximum number of followers in the unit.

4 The phase that this side of the card is used in.

Phases of a Turn

A game of Godtear takes place over 3 - 5 turns and ends when a player has 5 victory points. Each turn has two phases of action followed by one phase to reset for the next turn's action.

In the plot phase, an entire warband acts together. The first player activates all of their champions and followers, then the second player does the same.

In the clash phase, each champion and follower unit activates individually, and those activations alternate between players. The end phase determines who won the turn, but models do not activate during the end phase.

The end phase may look long, but it's actually quite simple. Once you've played a game or two, the first few steps will come naturally without even thinking about them!

Whether a model moves or is placed, it enters a hex when you put the model into a new hex. Models can only ever enter empty hexes (hexes without any models in them) with two exceptions.

The models from a single follower unit in Godtear can be spread out all over the battlefield if you wish. There are often benefits, however, to keeping them in a group or keeping them near their champion.

At times, models must also move in a specific way:

Ranges in Godtear are expressed in hexes just like movement. Simply count out a number of hexes to determine how far apart they are. The following diagram shows some example range measurements.

Morrigan is within 1 hex of Nia and is therefore adjacent to her.

Morrigan is within 2 hexes of the Cold Bones.

Nia is within 4 hexes of Morrigan.

In each plot phase and each clash phase, the players' champions and follower units will activate as follows:

When one champion or one follower unit makes its actions, that is one activation.

If a skill or trait allows a model to use an action outside of its activation, it can still use that action during its own activation.

Skill actions are the most varied actions a model can perform. A champion or follower unit with multiple skills listed can even use a skill as both of their actions.

(Note, however, that they can still use a specific skill only once per activation).

After using the ultimate skill, flip the champion's trait card to the back to show it cannot be used again.

Some ultimate skills are stronger versions of other skills, others simply provide the champion with an additional tactical option, and others are even exceptions to the standard rules of the game!

After a champion is knocked out, it must make a rally action before continuing the battle.

When it makes a rally action, the champion is no longer knocked out. Remove all wound tokens from the champion.

A follower unit with fewer models on the battlefield than its unit size can use the recruit action to return a model to play. Place 1 model from the follower unit in a hex adjacent to its champion.

If it is a large follower, remove all wound tokens from that follower. In the rare case that there are no hexes adjacent to the champion where a follower can be placed, place the follower in one of your deployment hexes instead.

Skills are the backbone of the action in a game of Godtear. They can wound enemy models, grant bonuses to friendly models, move models around the battlefield, and so much more. Using the right skills at the right time can mean the difference between victory and defeat. Each skill contains the following information.

1 The name of the skill.

2 The type of model you can use this skill on.

3 Range - The maximum number of hexes away a model can be and still be affected by this skill.

4 Accuracy - The number of dice rolled to hit your target (

6 Special rules for the skill.


When a follower unit uses a skill, choose just one follower to use the skill. When a hex contains multiple follower models that are part of the same unit, however, those models work together to increase the skill's power.

Check the individual skill to see how it functions for one, two, or three models in one hex.

If a follower is the only model in its hex when it uses a skill, use the first row.


Example of a Skill:

The model type icon is the first thing you should note when looking at a skill, because that icon determines how the skill is used.

The skill usually affects the champion or all models in the follower unit using the skill. Always read skills carefully, however. Some

The skill usually affects any friendly champion or follower unit within range, which could be the model using the skill. Some

he skill affects banners, hexes, both friendly and enemy models, or it has multiple effects combined into a single skill. Be sure to read

skills most carefully of all!

If a skill does not have any dice listed for damage, then you do not make a damage roll. Effects that add dice to a damage roll do not apply to skills that don't have one!

The skill usually targets a single enemy model within range, but some

skills can target more than one enemy. When you use a skill that targets multiple models, follow the steps below once for each target. You roll Godtear dice to determine the success or failure of

A boon or blight only ever affects one die roll or advance. After adds a die to a hit roll, for example, it goes away immediately and will not affect any other hit rolls

A knockout occurs when a model has wounds equal to its health stat. The number of wound tokens on a model can never exceed its health. Any additional wounds over a model's health are simply lost.

To get back in the fight, a knocked out champion must use the rally action the next time it activates. A champion cannot take any other action while it has wounds equal to its health, and it cannot have wounds removed until it uses the rally action.

A follower unit with no models on the battlefield still activates normally. They must make a recruit action as their first action that activation.

If a model is removed from the battlefield by an ability (without suffering wounds equal to its health ), then it does not award steps on the battle ladder for being knocked out.

The first player to gain 5 victory points wins the game. 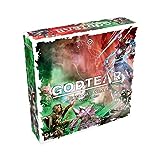 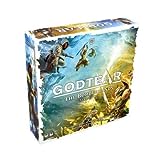