The game of Gobblet consists of:

Be the first player to align 4 gobblets in a row.

Whites win. 4 gobblets have been lined up.

Each player chooses a color and arranges his gobblets in 3 stacks of 4 gobblets each. Only the 3 biggest gobblets are showing at the beginning. These stacks are called external stacks.

Each player arranges his gobblets in 3 stacks.

In turns, players can either put a new gobblet on the board, move one of their gobblets already on the board to any empty space or gobble up any smaller size gobblet with a bigger gobblet already in play.

If you put a new gobblet in play, you must place it on an empty square. However, there is one exception to this rule: if your opponent already has 3 gobblets in a row on the board, you may gobble up 1 of the 3 pieces in the line with a gobblet taken directly from one of your external stacks.

Whites' turn to move. There are 3 black gobblets lined up, so the player with the white gobblets can gobble one of them directly from one of his external stacks.

The first player to align 4 gobblets in a row wins.

The gobblets forming the line do not all have to be the same size and can be lined up vertically, horizontally or diagonally.

Blacks win: There are 4 gobblets in a straight visible line.

Playing from Stacks: Players must play pieces in the order they appear, starting from the top.

Playing from the Board: Gobblets must be lifted to ensure that only one piece is moved at a time.

Draws: The game is declared a draw if 3 repetitions of identical moves between whites and blacks occur or by mutual agreement between players. 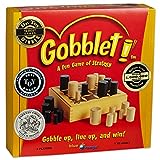 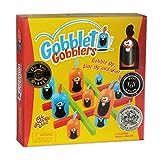 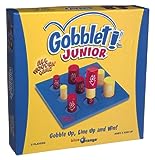