You choose an opponent to Attack. You then draw from the Luck Pile. If a "1" or "2" is drawn, then the attack has failed. If you pick a 3, 4, 5, 6 then you collect the top Goat Pile from the opponent.

In roulette fashion, you and the chosen opponent alternate drawing cards from the Luck Pile until the "2" is picked. The opponent starts by drawing TWICE, then alternate. If the opponent draws the 2, then you gain the opponent's top Goat Pile. If you draw the 2, you gain nothing.

You choose an opponent and make them miss their next turn. If a player is skipped, someone else may play another Loaf of Goat on the same individual to miss another turn accumulating skipped turns.

You may choose an opponent to play card on. When played, you may see all of this opponent's Action Cards and pick one to steal. Playing this card acts as a plus one action. You may NOT play the action card that is stolen until next turn, but you may play other action cards, birth, duel, or discard.

When played on an opponent, you get to choose which Goat Pile you would like to steal, regardless of where it is placed in their goatherd. You may steal any one stack except their bottom stack, which is protected.

You may not go through your opponents herd to find the best Goat Pile; you must call it out without counting the cards. Upon receiving the Goat Pile, you must divide the spoils evenly between you and the other competitors in this manner below. **You may NOT play Goatinhood after the Draw Pile is empty.

The pile may contain a mix of wilds and goat cards. When splitting there must be at least one pair of cards for each split, including wilds or goat cards; also at least one goat card must be included on top of each split.

The action card played is discarded and counts as an action for the attacker. It cannot block the effects of the Atomic Goat.

You may only play the card at the beginning of the duel or before the action card takes effect, in other words you may not "escape" in the middle of a turn.

When you play this, you draw two more cards and you get plus one action. Which could be birth, duel, or play another action card. Use extra cards wisely because at the end of that turn you return to the original card count in your hand.

When you play this you get plus TWO actions. This means that you can do a combination of birth, duel, play action cards, discard or two of each. 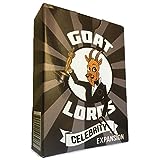