Players work as a team to escape from the house with all 8 Treasure Jewels before 6 of the rooms become haunted. Win or lose, you do it together!

Each player takes a treasure hunter mover. Place the movers outside the front door.

Note: in a 2-Player game, each player controls TWO TREASURE HUNTER MOVERS at the same time.

Shuffle the remaining CARDS and place them face down in their space on the board to form a draw pile. Each room is marked with a single letter. Place a GHOST FIGURE in the rooms lettered C, F, I and L.

Place a TREASURE JEWEL in each room that has a RED background to its room letter.

Note: The numbers on the TREASURE JEWELS aren't used in the Basic Game, so you can ignore them.

Note: Do not cover the room letters with figures or TREASURE JEWELS.

Treasure Jewels Go in These Rooms

Ghosts Start in these Rooms

On their turn, each player can take the following actions, but they must do so in the order listed

A player's turn always begins by rolling the movement die (the numbered die). The result shows 2 things : whether they must put a new Ghost Figure in a room (see #2 below ), and how many spaces they may move their playing piece (see #3 below).


2. Placing Ghost Figures on the Board

A - If a Ghost icon appears on the movement die, the player must flip over the top Ghost Card from the draw pile and place it beside the board to form a discard pile.

B - If there is a letter on the card, the player must place a Ghost Figure in the room with the matching letter.

C - If the flipped card is the Shuffle Card the player does not place a new Ghost Figure on the board . Instead, they collect all of the cards - both the draw pile and discard pile - shuffle them together and set them beside the board to form a new draw pile.

The player may then move UP TO the number shown on the die. For example, you may roll a 5, but only need 3 spaces to get where you want to be. If you choose to stop, you forfeit the remaining movement.

You may only enter and exit the house through the front door. Each square in the hallway is one space.

You may move through rooms; each room counts as a single space. You must enter and exit rooms through a door. You may not move diagonally.

In the hallway, players may move through spaces occupied by other TREASURE HUNTER MOVERS , but they may NOT stop in a space that is already occupied . If a player doesn't roll enough to move past another mover, they must stop in the first empty space behind the other mover.

On their turn, a player may choose to remain on the space they currently occupy (including outside the house) and not move their TREASURE HUNTER MOVER, but they still have to roll the MOVEMENT DIE and draw a card, if necessary.

If you end your move in a room with a Treasure Jewel, you may pick it up and place it in the back- pack of your Treasure Hunter Mover. If there is a ghost in the room, you must also fight it (more on that later).

Keep it there until you succeed in dropping it off (see #5). Your mover may only carry one Treasure Jewel at a time. Also, you may fight Ghosts and Hauntings while carrying a jewel.

If you successfully move outside the house with a Treasure Jewel, your movement ends and you drop off the Treasure Jewel there. Place it in a pile beside the door.

If you end your m ove in a room with a Ghost Figure, you must fight it.

To fight a Ghost Figure, you roll 1 BATTLE DIE (the die with symbols only). If you get the Ghost Icon, you may remove 1 Ghost Figure from the room.

Note: If you roll a Haunting or a Blank, take no actions and there is no penalty. If at least 1 other player is in the room with you, the player whose turn it is may roll 2 Battle Dice.

Each Ghost Icon on the Battle Dice removes 1 Ghost Figure from the room. If there are more than 2 players in "ICON the room, you still only roll 2 battle dice.

All Ghost figures removed from the board are returned to the supply and may be used again during gameplay.

You have to keep your eye on the number of Ghost Figures on the board. If too many start showing up, rooms will become Haunted. If 6 rooms become Haunted at the same time, you lose the game!

If a card tells you to place a Ghost Figure in a room that is already Haunted, the new Ghost Figure moves sequentially up through the lettered rooms (from A to B to C, etc). until it finds an available space (from room L, a Ghost loops back to room A).

If you are carrying a Treasure Jewel while in a Haunted room, you CANNOT move from the Haunted room until you succeed in "UN-Haunting" it.

A Haunting may be removed only if 2 or more players work together. At least 2 players must be in a room with a Haunting before the Battle Dice may be rolled. The player whose turn it is rolls 2 Battle Dice - if at least 1 HAUNTING ICON is rolled, the Haunting Marker is removed from the board.

All Haunting figures removed from the board are returned to the supply and may be used again during gameplay.


End Of The Game - The Basic Game

Once all Treasure Hunter Movers are outside of the house with all 8 Treasure Jewels, the players win!

If all 6 Haunting Markers are on the board before the players can escape with all the Treasure Jewels , the players lose! 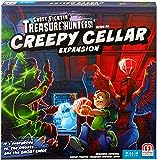 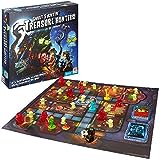