Do not lose! The player left with cards when everyone else is out is the loser.

A card can beat any other card of a lower rank in the same color. EXAMPLE: Only Reds can beat Reds, only Blues can beat Blues, only Green: can beat Greens and only can beat yellows.

The Hero is the top card and can beat any other card. A Queen can beat the Knight and all the Squires, but she cannot beat the King or the Hero. 8 Squires can beat 7 Squires and lower, but not 9 Squires or higher. Refer to THE CARDS section for rank order.

A trump color card can beat any other color card regardless of rank. However, it functions the same within its own color.

Example: Let's say the trump color is Red. A Red 7 Squires can beat any Blue, Greer or Hero, King, Queen, and so on.

Shuffle the deck and deal each player 6 cards one at a time face down. Once all the players have 6 cards, flip the next card in the deck over and place it in the center of the table face up.

Example: The face-up card is a Red 10 Squires, therefore the trump color is Red. All players can now pick up and look at their cards but don't let anyone else see them!

The player going first is the Attacker. Going in a clockwise direction, the Attacker throws down any card she wishes for the Defender to beat (the Defender is the player to the Attackers left). The Defender must beat the card. If he cannot, he must pick it up.

During the round, the Attacker can throw down more cards of the same rank of cards currently in play.

Example: The Attacker begins the round by throwing down a Blue 10 Squires, the Defender beats it with a Blue King. The Attacker can then throw down any color 10 Squires or King he wishes.

Let's say she decides to throw down another Yellow 10 Squires and the Defender beats it with a Knight. The Attacker can now throw down any color 10 Squires, King, or Knight.

The Attacker can keep attacking the Defender with a maximum of 6 cards or no more than the number of cards the Defender has left Once the Attacker is done attacking, he can say "done" and the round is over.

If the Defender is successful in beating all of the Attackers cards, all the cards in play are discarded into the discard pile and the game continues.

If the Defender does not successfully beat all of the Attackers cards, he picks up all the cards in play and misses his turn to attack. The player to his left becomes the Attacker and the game continues.

All players must refresh their cards at the end of every round by picking up as many cards as they need from the draw pile to make their cards in hand total 6. If a player already has 6 cards or more, he doesn't t need to pick anything up.

If a player has run out of cards during a round, he must still draw cards from the draw pile. Even if there is only one card left in the draw pile, the player must draw the card and continue playing.

Cards are refreshed in the clockwise order. The Attacker refreshes first. The Defender refreshes his cards last. If a player has run out of cards and there are no more cards to draw from the draw pile during his turn, he is safely out of the game and is not the loser.

The face-up trump card is the last card to be drawn and the trump color is maintained until the end of the game.

Gameplay continues until all the cards are exhausted.

After there are no more cards in the draw pile, play continues until all players get rid of their cards. The player that remains with cards in hand when everyone else is out is the loser.

The loser of the previous game deals the cards.

An even more fun and engaging way to play

Game of Kingdoms! In this version all players can attack during a round and cards can be passed to other players.

During a round between an Attacker and a Defender, other players can also throw down cards that are currently in play for the Defender to beat. Other players can only begin throwing in cards once the Attackers initial card(s) have been beaten.

If for some reason players throw down too many cards, the Defender can choose which cards to beat. Once the Defender successfully runs out of cards from beating the attacking cards, the unbeaten cards go back to their rightful owners.

When an Attacker attacks a Defender, the Defender can pass the card(s) to the next player with a card of the same rank.

Example: The Attacker throws down a Blue Knight, the Defender has a Green Knight in his hand. He can throw down the Green Knight and pass both cards on to the next player to beat.

In this case, the Defender becomes the Attacker! However, if the new Defender also has a Knight, he can do the same thing! And so on. This can only be done during an initial attack, before beating any cards.

Sometimes picking up cards on purpose can be a wise move.

You may consider collecting cards of the same rank to then enhance your Attacks.

You can try to defend with cards of the same rank as much as possible. This decreases the chance of the Attacker throwing down more cards. 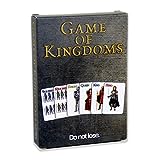