The player with the most points wins. Earn two points for capturing or using the most Ingredient Cards, and one point for each Power Card you capture or use.

Ingredient Cards are used to complete spells and capture other cards.

Ingredient Cards are easy to recognize by the numbers printed in the upper left corner of the card.

The numbers don't mean the cards are worth more or less, they just identify which cards you can capture during your turn (by matching or adding cards to equal the numerical value of another card).

Power Cards have special powers. It's easy to recognize them by the power puff icon in the upper left corner of each card.

There are four Witches, four Frog Juice, one Black Cat, one All-Purpose Witch Wash, and five different Spells. For a description of the special powers and a guide to playing them, read "Playing Power Cards" later in the rules.

You won't find the Frog Juice card in that section, though. It's scored like a Power Card but played like an Ingredient Card. Frog Juice is special, not for the powers it has, but because it's the name of the game.

It has both a number and a power puff icon, so capture it like an Ingredient Card, then place it in your Power Pile for one point.

The first time you play, look over the cards in the deck so you'll be able to recognize Ingredient and Power Cards.

Next, decide which player will be the dealer. The dealer shuffles and deals four cards to each player.

The player to the left ofthe dealer goes first, and play continues clockwise.

Here's how to play a turn:

Each time you capture cards, place them in one of two piles on the table in front of you: put your Ingredient Cards in one pile, and your Power Cards in another.

The cards in these piles are out of play for the rest of the game.

You can only play a Power Card if you have it in your hand. So what do you do if there's a Power Card face-up in the center? If it's a Spell, the Black Cat, or the All Purpose Witch Wash, it's powerless.

Once a Power Card in the center is captured or swept, it goes right into your Power Pile for one point, without being played.


Any time you can't complete a spell, leave it on the table to complete later. (Remember - adding a card to an incomplete spell doesn't count as the action for your turn . . . it's extra).

After you've taken your action, you can always go back to your incomplete spells. But if you discard after your action and forget to ask for the cards you need, you're out of luck until your next turn.

Continue playing until there are no cards left in the draw pile and players have no more playable cards in their hands.

First, count the number of cards in your Power Pile. You get one point for each Power Card.

Then count the number of cards in your Ingredient Pile. Whoever has the most cards gets two points; other players don't get any points. If there's a tie for the greatest Ingredient Pile, the tying players each receive two points. 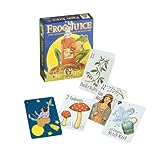