One Goes We All Go

This one is simple, every time the buzzer goes off the whole team drinks. So if your team is guessing a word and the timer goes off, yep, you all drink.

When the timer goes off whoever is describing the word drinks.

This one's a little more confusing but try to follow us. Okay, so when the timer goes off for whichever team is guessing, the opposite team gets to create a rule for the other team.

Make sense? No? Okay, we'll try again. Say team #1 is guessing and the timer goes off while they're guessing team #2 gets to create a rule for team #1.

Example Rule: every time the word on the card starts with "J" everyone on your team has to drink their juice.

Get it? Good. Have some mercy with this one, drinking too much apple juice can give you a tummy ache. 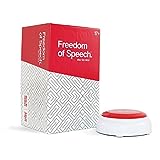 Freedom Of Speech Adult Board Game