Forbidden Island is a cooperative board game where players are on an slowly sinking island constructed by tiles.

As the game progresses, more island tiles will sink and this will increase the pace because as the ware level rises, it will get more hard to survive.

There are 6 different roles: explorer, diver, engineer, messenger, navigator and pilot and each role has different abilities. During the turns, a player can do several actions like moving, shoring up, giving a treasure card or collecting a treasure, helicopter lift, etc...

Will your team be the first to breach its borders, capture the treasures, and make it out alive? Your team of adventurers must work together to keep Forbidden Island from sinking, in order to buy enough time to capture its four treasures.

Once you've captured them, you must make it to Fools' Landing and escape by helicopter to win. If however, the island sinks before you can complete your tasks, the mission ends in defeat. â€¦ 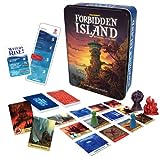 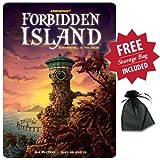