To be the first player to collect all 4 action tokens and have 4 or more monkeys on the bed.

All players place one of their monkeys onto the START space.

Note: This monkey will act as a moving piece on the game board throughout the game.

Players place their remaining 5 monkeys in front of themselves.

The youngest player goes first and places one of his/her monkeys onto the bed. The player then spins the spinner and moves to the right the correct number of spaces.

Players act out the action on the space they land on, place a monkey on the bed and collect a token with the image of the action completed: "Take a Bath", "Brush Teeth", "Put on PJs" and "Go to Bed".

Note: If a player lands on an action space a second time, no token is taken but the player still gets to act out the action.

Monkeys Jumping on the Bed Spaces

Players place the specified number of monkeys onto the bed if landing on one of these spaces:

Note: If a player lands on a monkey space and does not have the specified number of monkeys, the player will place all remaining monkeys on the bed.

For example, if a player lands on place 3 monkeys on the bed but only has 2 monkeys, the player will place his/her 2 remaining monkeys onto the bed.

This is important-after each turn...

After completing the action or placing the correct number of monkeys on the bed, the player pushes the RED colored bedpost down ONE time.

Note: Don't forget to push down the yellow section of the bed after each time it pops up.

Play moves to the left.

Every time a player passes the START space he/she may place one monkey onto the bed.

The game ends when the player collects all 4 tokens (one of each of the four actions "Take a Bath", "Brush Teeth", "Put on PJs" and "Go to Bed").

The first player with all 4 tokens and 4 or more monkeys on the bed, wins the game.

If two or more players have all 4 tokens and have the same number of monkeys on the bed, all players are declared winners. 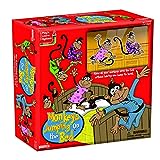