Work together and help each other use the most powerful tool you have to block upcoming policy votes - the Filibuster!

Filibuster is a semi-cooperative game for 3-5 players acting as Senators in the minority trying to stop a series of policies from passing by utilizing the Filibuster.

The game is played over seven rounds, with each round consisting of an election phase to determine the group's leader, and a filibuster phase to block the policy revealed that round.

The leader is responsible for increasing the filibuster time to meet or exceed the minimum number of hours required to successfully block the policy. They also interact with the Time Deck, which is full of events that affect the players and will typically cause the end of the round.

Non-leader players during a round act as supporting Senators that play assists and pass cards to the leader to help effectively block the policy and meet the Filibuster requirements for the round.

If at any time the players fail to block 4 policies, everyone loses! If all 7 rounds are completed and at least 4 policies have been successfully blocked, the Senator who earned the most influence (rewarded based on performance while leading a filibuster, as well as playing assists and passing cards) is the true winner!

So, be sure to work with your colleagues to prevent too many policies from passing through... but always look for ways to help yourself a little more than your fellow Senators so that you come out on top! 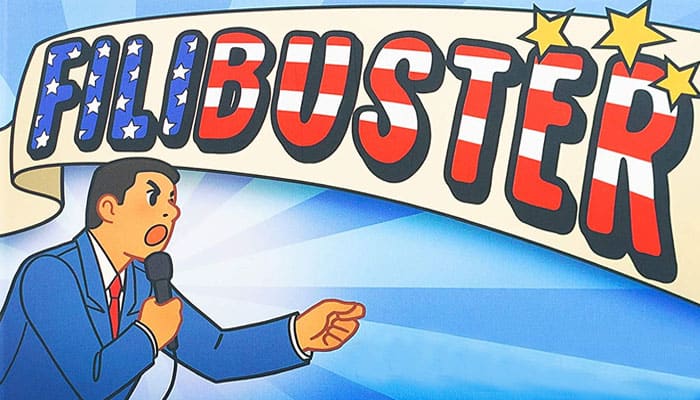 The elections are over, the people have spoken... and for you and your fellow Senators, the result was a bloodbath!!! You find yourselves in the minority after sweeping changes to the Senate and a transfer of power at the White House.

Now you must stand together and help each other use the most powerful tool you have to block upcoming policy votes - the Filibuster! â€¦ Q: Can I pass an Assist card to the current Senate Minority Leader?

A: No, players may only pass cards that increase the Filibuster Track to the Senate Minority Leader.

Q: As the Senate Minority Leader, can I save my Action cards for later, i.e. skip playing a card from my hand after drawing a Time card?

A: If the Senate Minority Leader has an Action card in hand that can increase the Filibuster Track, it must be played.

Q: Yay! We are winning the round! Can't we just end the Filibuster now?