The south sea, AD 1777! Three years after James Cook visited the islands, the islands are embroiled in a contest for possession of legendary shrunken heads. The players' only desire is to acquire these »head attractions« for shipment to museums in Europe.

Although the islanders are very interested in trading their treasures with the Europeans for the glass beads they offer, their traditions require that such exchanges be done during a special KAWA ritual.

Thus, the players must submit to this ritual by playing against each other using their beads to acquire the prized shrunken heads. The winner will leave the island with the treasure. The losers may remain to provide further treasures.

Each player takes a screen. Lay the shrunken heads in the middle of the table. Shuffle the condition and effect cards separately and place them face-down in separate stacks on the table.

The game is played over 4 rounds. Each round has the following 5 phases:


The 5 Phases in Detail

At the beginning of each round, each player takes a complete set of glass beads: 5 green, 4 red, 3 yellow, and 2 blue, placing them behind his screen to hide them from the other players.

In the first round only, place another complete set of glass beads as a supply in the middle of the table and place all remaining glass beads back in the box - they will not be needed in this game.

This double column gives the conditions and effects for exchanges for this round (see figure on page 3).

The orientation of the goal cards determines whether a player should try to collect the most of a color or the fewest.

The setup on the table should look as follows:

The players execute the exchange three times, one after another in this phase.

Each of the three exchanges is divided into a) offer and b) analysis.

Each player takes 1-4 of his glass beads (from behind his screen) in any mixture he chooses and puts them in his closed fist. This is his offer for all 4 exchange conditions. When all players are ready, each places his offer in front of his screen.

Beginning with the top-most condition card, the players look to see which of them, if any, fulfill that condition. The condition cards always specify the most or least glass beads of one or more colors of beads.

Important: when analyzing an offer, an offer of 0beads of a color would count as a least offer(but there must always be a total offer of 1-4 beads). See also the example on the last page.

The player who offered the most (or least) beads shown on the condition card must now execute the corresponding effect. Each effect card applies to one player! If two (or more) players tie with the best offer for a condition card, they cancel each other out.

This means that the player with the second best offer must execute the corresponding effect card. It is possible for there to be a tie for second best, as well. These players would also cancel each other out. If all players are canceled out, the effect card is not executed.

The glass bead offers are compared to each of the 4 condition cards. The exchange conditions are executed one at a time from top to bottom. After the fourth exchange condition is completed, players place all beads offered in the supply in the middle of the table.

Now, the players participate in a second exchange, using the beads left (including any added) behind their screens, using the same rules as for the first exchange. Each takes 1-4 glass beads in his hand, shows them simultaneously, and they are then all analyzed with the 4 condition cards, from top to bottom.

After the second exchange, the players participate likewise in a third exchange.

The player takes half (rounded down) of the corresponding glass beads from the supply.

All other players take 1 corresponding glass bead from the supply. If there are not enough beads in the supply to complete the effect, the players all take nothing!

No loss of offer.

After all 4 exchange conditions are completed, the player does not place any glass beads from his offer in the supply. He may not choose to place some and not others - he keeps them all.

The player must rotate one of the goal cards 180 degrees, thus changing its orientation and effect (it remains in the same position relative to the other goal cards).

After the three exchanges, the players distribute the shrunken heads.

First the player sequence is determined in accordance with the goal cards. All players set aside their screens to show their personal supplies of glass beads.

The first goal card (next to the goal indicator card) is analyzed. Depending on its orientation, the players needed to collect the most (or fewest) of this color of glass beads.

If two or more players tie for most (or fewest) of the glass beads of this color, those tied look at the second card to resolve the tie. If there is still a tie, they move to the third card and, finally, the fourth.

After the first player is determined, the players determine a second player and third player and so on, using the same methods until all players are placed in sequence.

If two or more players tie for the same place, each takes shrunken heads based on the next lower rank.

Anna and Chris are in places 1 and 2, as they both have 3 red beads (more than Henry and Mary). Also, they both have the same number of blue beads (0 each). Anna has one more green bead than Chris, so she wins 1st place with the third goal card. Chris claims 2nd place.

Now, the players must decide how Henry and Mary place. They are tied on the first three goal cards with 2 red beads, 3 blue beads, and 3 green beads each. As Henry has more yellow beads than Mary, he wins 3rd place and she is last. Thus, the players in this round are: 1 - Anna, 2 - Chris, 3 - Henry, and 4 - Mary.

Now the players place all their glass beads in the supply and begin the next round with the distribution of glass beads.

After 4 rounds, the player who has collected the most shrunken heads leaves the island and is the winner of the game! If players tie with the most heads, they rejoice in their shared victory. 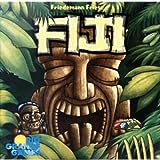