Welcome to Vault 84, the latest in a series of public defense works from Vault-Tec, your contractor of choice when it comes to the best in nuclear shelters. This document is for the events following a worldwide nuclear war.

In such a case, this shall walk you step by step through surviving and eventually thriving in the irradiated wasteland left outside the confines of your Vault-Tec vault.

When you step into the wasteland, you are on your own! Each survivor will need to earn experience, fight dangerous enemies, scavenge, trade, and complete quests to make it out there.

At the start of your journey, you will have nothing but the vault suit on your back. By following this survival guide, you will grow in power and wealth quickly and learn to vie for influence with whatever factions now control the wasteland around you.

Fallout is a post-nuclear adventure board game for one to four players. Based on the hit video game series by Bethesda Softworks, each Fallout scenario is inspired by a familiar story from the franchise.

Survivors begin the game on the edge of an unexplored landscape, uncertain of what awaits them in this unfamiliar world. With just one objective to guide them from the very beginning, each player must explore the hidden map, fight ferocious enemies, and build the skills of their survivor as they attempt to complete challenging quests and balance feuding factions within the game.

As they advance their survivors' stories, players come across new quests and individual targets, leading them to gain influence. Who comes out ahead depends on how keenly and aggressively each player ventures through the game; however, if a single faction is pushed to power too quickly, the wasteland will be taken for their own, and the survivors conquered along with it. 1 Choose Scenario: As a group, choose which scenario you would like to play. For your first game, we recommend playing the scenario "The Commonwealth". Take the corresponding scenario sheet and place it above the play area. â€¦

There are a few more things you need to know before heading out into the wastes! The next few sections will tell you about gaining XP, acquiring traits, and the factions you will confront during your adventures.

As you kill enemies, have encounters, and complete quests, you will gain XP and become more powerful . . . and more S.P.E.C.I.A.L.! Each time you kill an enemy, you gain XP equal to that enemy's level. Other game effects that grant XP will specify the amount gained. â€¦ 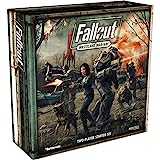