The Roman Empire has fallen, the centuries that created a societal transformation. Lords sought to claim lands, build their domain, and foster growth in science and the arts. The beautiful Iberian peninsula stands as a model of prosperity of the European continent.

It's during this era, that Spain built some of the most beautiful cathedrals in the world. With advances in science, monasteries and hospitals worked in unison to assist the sick and poor. As a lord, there will never be a better time to grow your prestigious domain and reputation.

With new building, players may also acquire another die to add to their pool. Players will be challenged with where to build - insuring the building's safety behind city walls or risking it the countryside where there is more room to grow. Players will discover no games will ever be the same!

In ERA: Medieval Age, players roll dice to collect resources which they use to build the safest, most prosperous, and most glorious medieval city they can. The player who scores the most points wins the game!

The player board is divided into 4 sections:

Where the starting player in this round keeps track of the steps with the black peg.

All structures a player builds are placed here.

The game is played over a series of rounds made up of 6 steps. Each step is carried out completely by each player before the starting player announces the next step, moving the black peg downwards.

Step "1. ROLL" is carried out simultaneously by all players. During each other step, play proceeds clockwise around the table, beginning with the starting player.

Dice provide you with resources and culture, let you build, and give you other special actions and abilities (check the Appendix for all of the possible dice results).

In this step, players simultaneously roll all their dice behind their player screen. This is each player's first roll.

They may then perform a third (and final) roll, rerolling any number of their dice that do not show a skull. the first roll if they don't show a skull.

Once everyone has rolled up to three times, all players lift their screens to reveal their results.

Note: White dice that now show a feather may be rerolled openly in player order. Optionally with another one of this player's dice, even one with a skull on it.

shown on your dice to your player board by advancing the appropriate pegs.

Note: Culture can only be gained through white and blue dice. Skulls on the dice are not added to a player's disaster track.

to your resource track for each of your farms (you start with one farm). Add 2 wood

to your resource track for each lumber mill you have in your domain.

If you don't have room on your resource track for all of the new resources, the excess is lost.

Exception: If you run out of room when advancing the peg on your culture track, record "+25" on the score sheet under your name, then reset the peg to zero and continue tracking culture points from there.

In this step, players feed their population. Subtract 1 food

from your food track for each of your dice. Dice, representing your population, that you cannot feed suffer famine. Advance the peg on your disaster track

once for each die you cannot feed.

Example: Colleen has 4 dice but only 3 food on herfood track. 1 She moves her food peg back to zero 0 2 and advances the peg on her disaster track once.

If a player's dice show one or more skulls, a disaster occurs, according to the table in the Appendix. The starting player resolves their disaster first, then proceed clockwise.

Note: You always add all your own skulls together. Each player causes at most one disaster in this step.

During the Build step, players can build walls and buildings to improve their domain, using the resources on their player board. The starting player builds first, then proceed clockwise.

that you have rolled. Subtract the required materials from your resource track, then take the wall or building from the supply and place it in your domain in any orientation of your choice (provided it fits).

If you don't have the required resources, you can't build the wall or building. You may only build walls and buildings which are still available in the supply.

If you take the last building of a type from the supply, flip over a blank tracking token to its X side (not for walls). When all the tracking tokens show an X, the game will end at the end of the current round.

Note: You may build multiple copies of the same building and their benefits are cumulative (e.g., 2 monasteries = set 2 dice; 2 universities = bonus points for each of them).

Buildings placed diagonally to each other are not considered clustered when determining which buildings will be affected by the disease.

Note: Buildings are considered walled if they are built in an area that is completely surrounded by orthogonally adjacent walls and keeps. There is no wall around the perimeter of your domain. If you want walls there, you need to build them yourself.

Example: Colleen rolled 2 hammers during the Roll step, so she can build up to 2 buildings (or walls). 1 She decides to spend 1 trade good, 1 stone and 1 wood on a church, which she places in her domain. 2 Also, she spends 3 wood on a lumber mill and places it there as well. Since it was the last lumber mill in the supply, she flips a blank tracking token over to reveal an X.

In the Extort step, nobles rattle their swords, demonstrate their strength at arms, and demand resources from their weaker opponents. The starting player extorts first, followed by the other players in clockwise order.

To extort, demand 1 resource of your choice from every other player with fewer swords/showing. Do this in player order around the table. For each affected player, you can demand one food

(provided the other player has it on their resource track).

If a player doesn't have any resources to give or refuses to pay the bribe, they must advance their disaster peg

twice for each resource they fail to hand over.

Players who rolled a number of shields

that match or exceed the number of swords / rolled by another player, are protected and do not have to pay a bribe to that player.

Advancing on the Disaster Track

record "-25" on the score sheet under your name, then reset the peg on your disaster track

Important: Check to make sure you have the correct dice at this time!

If you have built any buildings that provide you with a die (e.g., keeps, longhouses, townhouses and churches) make sure you take all the associated dice now. If you had to remove any of those buildings (e.g., due to a disaster), be sure to return the corresponding dice now to the game box.

If all of the tracking tokens now show an X, the game is over. Follow the rules for the Game End. Otherwise, the player that currently has the starting player peg passes it to their left. The new starting player sets it into the

(Roll) spot of their player board to track the new round.

Continue playing rounds in this manner until the game ends.

Players compare their final scores. The player with the highest score wins!

In the event of a tie, the tied player who has the most trade goods

remaining wins the game. If players are still tied, the tied player with the most stones

. If tied players have the same amount of every resource, they smare the victory.

Players tally their scores on a score sheet: 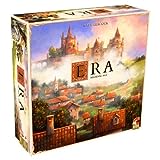