Dragon Dash is a cooperative game. This means that all players are teammates and have the same goal. Either everyone wins, or everyone is defeated!

The Queen has asked her brave knights (that's you!) to build a path across her kingdom. But watch out for those pesky dragons!

They are doing their best to stop the path from being built. Use your shield, your helmet, and your sword at just the right moment to fend off a dragon and finish your path before you run out of tiles.

Place the KNIGHT'S GEAR tiles on the game board (these are the HELMET, SHIELD and SWORD tiles). To do this, roll the dice to determine where all three tiles should be placed.

For example, if rolling for the SHIELD and the dice indicate the letter B and the number 6, place the SHIELD on the square located at Column B and Row 6.

Place all the DRAGON tiles and PATH tiles face down in a draw pile. Now you are ready to start the game!

Decide who will play first (we recommend starting with the youngest player). The first player selects one tile from the draw pile.

If this is the first PATH tile being placed on the game board, it must join one of the two paths that lead off the playing area. If the first tile drawn is the dead-end tile, return this to the draw pile and select another PATH tile

If a PATH tile is placed on a square already occupied by a KNIGHT'S GEAR tile, collect that KNIGHT'S GEAR tile and place it to the side. You will want to save it for later in the game to help fend off a DRAGON.

Helpful Hint: You can work on both ends of the trail. Sometimes certain trail pieces are better suited for one end of the trail.

If a DRAGON tile is selected, roll the two dice to determine where the DRAGON will land. If there is already a DRAGON on that square, roll the dice again.

If a DRAGON lands on a PATH tile, the PATH tile is replaced on the game board by the DRAGON, and that PATH tile is placed in the discard pile.

But wait!! If the players have already collected a KNIGHT'S GEAR tile, they can fend off the dragon using their SHIELD, HELMET, or SWORD. Instead of landing on the game board, place into the discard pile the DRAGON and the KNIGHT'S GEAR tile that was used.

Play moves clockwise around the table, with the next player selecting a new tile from the draw pile.

As this is a cooperative game, either everyone wins, or everyone is defeated!

If you run out of PATH tiles and the path doesn't reach from one end of the kingdom to the other, the game is over and the dragons have won.

If it becomes impossible to complete the path because all possible routes are blocked by DRAGON tiles, the game is over and the dragons have won.

However, if you manage to build a continuous path across the kingdom, the brave knights (that's you!) have defeated the pesky dragons and completed the Queen's task. Hooray!

There are two ways to play. The easiest way is where everyone can discuss their options as a group before placing tiles on the game board.

The more challenging way is where players are not permitted to talk about their moves with each other. Decide which way you want to play before starting the game.

If you want to increase the likelihood of winning, you can remove a DRAGON tile from the draw pile prior to the start of the game. Each DRAGON tile that is removed increases the chance the knights will be successful.

If you want to make the game more challenging to win, you can remove a PATH tile from the draw pile prior to the start of the game.

Each PATH tile that is removed increases the chance the pesky dragons will be victorious. 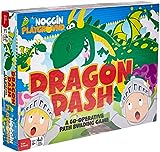