Each player has 4 in hand. As with the standard rules, the storyteller (eg A1) chooses a card and express a matching phrase or word.

The teams B, C and D agree to play one card per team, without showing their hand (i.e. cards) to their respective partners (e.g. B1 says to B2: this one is for me, i have a good card)

So we have the card of the storyteller A1

So,there are 5 cards on the table. All the players vote for one card (7 votes).

As with the standard rules, it is forbidden to vote for the card you have played, but a player from a team may vote (without knowing it) for a card played by his fellow team member.

The points are calculated following the standard rules: If A2 is the only player to vote for the card of the storyteller A1, the team A gets 6 points. The next storyteller to play is then B1 and each player draws cards, if necessary, in order to get a full hand (4 cards). And so on...

The game stops when one of the teams reaches a score of 30 points.

When only one player has found the storyteller's card, they both score 4 points, instead of 3.

The storyteller has the possibility to either sing a song or some music that could be somehow related to the card, or even mime it. The rest of the game stays the same.

Finally, nothing prevents you from mixing the different variants together or creating some of your own! 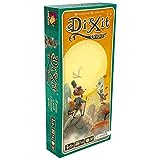 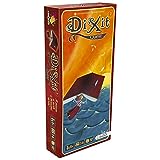