Diplomacy is a strategic board game created by Allan Calhamer suitable for 2 till 7 players. The game is a relatively very simple game, but complex in execution.

It is a game of negotiations, alliances, keep promises and even break promises. To win or to survive, players will need the help of other players. It is very important who to trust and when.

Each player controls an armed force of a major European country just before the beginning of World War I.

The objective of the game is to get control of the majority of the map.

Each player moves his units and defeat others to win the possession of major strategic cities and provinces (supply centres) on the map. These places allow the player to produce units.

It is different than other games since there are no elements of luck (by rolling dices).

Each player aims to move his or her few starting units and defeat those of others to win possession of a majority of strategic cities and provinces marked as "supply centres" on the map; these supply centers allow players who control them to produce more units.

Every unit has the power of 1 and can move one space each turn and there are two moves in a year (Spring and Fall moves). Each player writes orders for his fleets and armies they are executed simultaneously.

Because it's known when the game ends, every player must plan carefully that he have the maximum number of pieces on the board on the end to win the game.

The game can also end when a player controles 18 or more supply centers. During this phase, the players meet to discuss their plans for the upcoming turns. Alliances and strategies are made. Usually, they last around 15 minutes but may end sooner if all players agree. … The map is divided into 75 different provinces on water and land. Land provinces may be coastal or inland.

34 provinces have a supply center and are marked with a dot/star.

St. Petersburg, Bulgaria and Spain, there are split coasts. A fleet in those provinces must be on one coast or another.

Diplomacy should best be played by 7 players. Every player chooses one of the 7 major powers in Europe: England, France, Germany, Italy, Austria, Russia and Turkey.

All Players start with 3 or 4 supply centers and these are called "home centers". …

A player can't dislodge or support the dislodgment of one of its own units (even if that dislodgment was unexpected).

The French Army in Paris, supported by its Army in Marseilles can't dislodge its own Army in Burgundy.

The French Army in Paris, although supported by the German Army in Ruhr, can't dislodge its own Army in Burgundy.

The German Army in Munich is in a standoff with the Austrian Army in Tyrolia.

German Armies in Ruhr and Silesia tried to create a standoff with each other in Munich. … Good communication with everyone is essential in Diplomacy. Talk to everyone, even to your enemies or the players that are far away on the other site of the map.

When your are behind, diplomacy is even more important because an avoided battle is a battle won.

Keep also in mind that your today enemies can be your tomorrow friends.

Stay under the radar

When you are intimidating much other players, when you play flamboyant, when you open the game very successfull or when you make outrageous claims, other players will make you a target. … 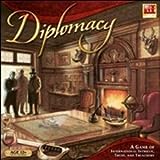 How to play Diplomacy Board Game (Tutorial Part 1 of 5)

How to play Diplomacy Board Game (Tutorial Part 2 of 5)

How to play Diplomacy Board Game (Tutorial Part 3 of 5)

How to play Diplomacy Board Game (Part 4 of 5)

How to play Diplomacy Board Game (Part 5 of 5)

Every Game is Awesome 32: Diplomacy