"Nyhavn" (New Harbor) is famous for its houses with colorful gables built along the waterside. The players face the challenge of construc- ting new facades in a way that fits perfectly in with this picturesque harbor scenery.

The goal of the game is to be the first player to score 12 or more points, or to have the most points when the End of Game card is revealed.

Players will collect cards of different colors from the display, which they can use to purchase facade tiles of the same color in different shapes and sizes.

Players will use these tiles to construct the facade of their house little by little. Each time a floor (row) is completed they will score 1 point, and 2 points for finishing a section of the house (column). However, these points are doubled if the row or column is made entirely of windows.

When players cover one of the coats of arms, or finish a floor with a coat of arms, they will gain a special ability which will help them reach their goal faster.

Start of the game

Beginning with the first player (we recommend the oldest player goes first), and continuing clockwise, each player draws their starting hand from the card supply. Draw the following number of cards depending on the number of players:

The active player (starting with the first player) chooses one of two possible actions, then performs their chosen action:

After taking an action, play passes clockwise to the next player. The game ends immediately as soon as a player scores 12 or more points or the End of Game card is revealed.

The player takes 2 adjacent cards from the display and adds them to their hand. It's not permitted to only take one card.

Then, the player refills the display with cards from the supply.

Example: The player takes the two adjacent purple cards, and adds them to their hand.

Players have a maximum hand size of 7 cards after they have drawn cards. If drawing cards puts them over the 7 card limit, they must immediately discard down to 7 cards.

Skip this step in a game with 2 players. The game ends after the card supply is used once only.

The player exchanges cards from their hand for a facade tile and attaches it to their house. They then gain points for any rows or columns completed this turn.

The active player discards cards from their hand in exchange for a facade tile, following two rules:

If the player meets these two requirements, they take the chosen facade tile. A player can only ever take one facade tile on their turn.


Exception: If a player places a facade tile such that at least one of the squares is touching a previously placed piece of the same color, they may discard one fewer card than normal.

Adjacent to the same color:

Example: The green tile is placed adjacent to another green tile of this house, so the player must discard only 2 instead of 3 cards.


Not adjacent to the same color:

Example: The green tile is placed not adjacent to another green tile of this house, so the player must discard 3 cards.

The player must place the facade tile immediately, obeying the following construction rules:

If a player completes one or more rows or columns of their house during their turn, they score points for each as follows:

The player advances their scoring marker on the scoring track accordingly.

The game ends immediately as soon as a player scores 12 or more points or the End of Game card is revealed: 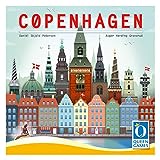