Go head-to-head with your opponent and see who can grow their city without going over the limits. Take turns drawing shape cards and simultaneously place the matching tiles into your city grids.

Whoever is able to fit their tiles without going over the edge of their grid wins.

Each player takes a city grid and 21 city tiles of the same color . Lay out your tiles in front of you so that they are easily identifiable.

Each player chooses one cityscape starter tile and places it roughly in the center of their city grids. (You may orient the tile in any direction, as long as it cover most of the center logo). Place the remaining two starter tiles out of play.

Shuffle the deck of shape cards and place it face down in the center of both players.

Tiles may be oriented in any direction, even flipped over.

The tile must entirely fit within the boundaries of the city grid.

Once a new shape card has been drawn, you may not move the tile just played.

Continue taking turns drawing cards and simultaneously placing city tiles until one of the following happens:

For a different game, try one of these alternate ways to play: 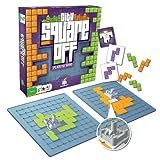