The Cir*Kis board, which has a storage compartment and scoring track for each player and a central playing area, and 4 sets of plastic pieces.

Each set consists of 20 pieces and a scoring peg.

Players take turns placing a piece on the board next to the last piece played (the "Leader"). Completing Circles and Stars scores points.

The first player to score 40 points wins the game. The game can also end if one player plays his final piece or if no further plays are possible, in which case high score wins.

Arrange the board so that each player is seated behind a corner. Select a set of pieces. Put your scoring peg in the "0" hole near your compartment.

Arrange your pieces on the table (this makes it easier for all to see which pieces haven't been played).


The youngest player is first to place a piece. At least part of it must be inside the Center Ring or Center Star.

Pieces can only be played where they fit. They "snap" into place when placed properly. Play passes to the left throughout the game.

There is only one rule when placing a piece: Each new piece must touch the last piece played (the Leader).

Purple plays next as shown. His piece touches Green's.

The next four pieces "Follow the Leader" as shown.

Pieces "touch" when edge-to-edge, or even just point-to-point, like Purple's #2 piece in the illustration above.

There are three ways you may gain a free turn:

If Purple plays here, he will receive a free turn because all adjacent spaces are filled.

These two spaces are adjacent to each other.

Whenever you gain a free turn, you immediately place another piece so that it touches any other piece on the board. This piece becomes the new Leader. A free turn often provides a great opportunity to increase your score.

There are five segments in each shape (Circle or Star) on the board. Whenever a Circle or a Star shape is completed, you score 10 points if you have the most segments in the shape.

Advance your scoring peg accordingly. 5 bonus points are awarded to the opponent who completes either shape. If you complete a shape and score its 10 points, you do not score the 5-point bonus.

Red will score 15 points: 10 for having the most segments in the Star and 5 bonus points for completing the Circle.


Note: If two players each have two segments in a completed shape, no score is awarded except the 5-point completion bonus.

There are ten Circles and six Stars on the board.

You lose a turn if you can't place a piece (because the grid spaces next to the leader won't accommodate any of your remaining pieces).

If all players lose their turn in succession, the game ends.

The ten spaces around the central Star comprise the "Center Ring". Award 15 points to the player who has the most segments among these ten when, and if, the Center Ring is completed. (The 5-point bonus is awarded as well, if a different player completes the Ring).

For a longer game, play more rounds until one player has scored 100 points. 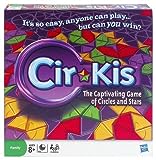 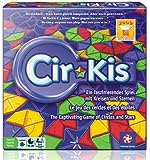