CHA-CHING! is a simple card game full of surprises. Players, in turn, pick up and discard cards of different values and try to have all eight of their cards add up to the Target Number in each round.

The first to do so "GOES OUT" and scores zero points. Everyone else has the value of their hand scored against them. But beware of the CHA-CHING card!

When played it allows the player to RE-ROLL the Target Number OR TRADE CARDS with any opponent mid play. Those who think fast and can add even faster will be able to keep their hand from getting out of hand!

Be the first to "go out" each round by having eight of your cards add up to the Target Number.

Going out scores zero points. When a score reaches 1000 points the game is over and the player with the lowest score wins.

Elect a player to keep score (grab pen and paper). The player left of the scorekeeper shuffles the deck and deals 8 cards one at a time, face down to each player. Players can look at their cards but don't want opponents to see.

Put the remaining cards facedown in the center of the playing area to create the draw pile. Flip the top card over and place it face up next the draw pile to start the discard pile.

The dealer rolls both dice to generate the Target Number to begin the round.

The black die number is always the first digit and the white die number is second. (i.e., black rolls 3, white rolls 6, the Target Number is 36).

Note: A valid Target Number is 10-99. If black rolls 0 simply re-roll until black rolls greater than 0. The player left of the dealer starts the round and play passes to the left.

In turn, each player draws one card from either the draw pile or discard pile and then must discard one of their cards face up on the discard pile thus resulting in every player maintaining eight cards in their hand at all times.

If a player wants to use their CHA-CHING card they do so when they discard. (See CHA-CHING Card).

Note: Players cannot "pick up" a played CHA-CHING card from the discard pile and would be forced to draw their card from the draw pile for that turn.

Have score keeper add it to their score. (See Scoring) Play continues until a score reaches 1000 points.

If a player "goes out" and it is discovered that their hand did not add up to the Target Number; that player alone gets penalized and has the current Target Number added to their score, everyone else scores zero points for that round.

CHA-CHING! cards are only played on discard. Players have two options: Trade their hand with any opponent they choose - OR- Roll the dice to generate a new Target Number mid play.

They have choice: roll any one die (black or white) or both dice.

¢ Cards are valued and scored at zero.

Cha-CHING! Cards have a value of zero and a player can "go out" with them in their hand but they score 50 points each for players taking penalty.

Note: $ Cards can not be used as CHA-CHING or ¢ Cards.

The hand would score a penalty of 108 points. Both $ cards are valued at 25 (the largest value card in the hand). The other cards are scored at face value.

When any player has accumulated 1,000 or more points the game is over and the player with the lowest score wins.

If there is a tie player's have the option: play one last round or have a thumb war to determine the winner.

Players who want a more relaxing game with less cha-change mid-play can remove 2, 4 or all of the CHA-CHING cards before their next game.

A player "goes out" with the hand equal to the Traget Number rolled: 62.

But..... a player caught with the same hand would score 161 penalty points. 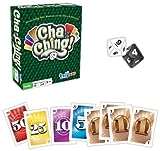 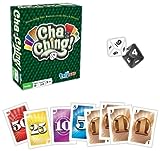