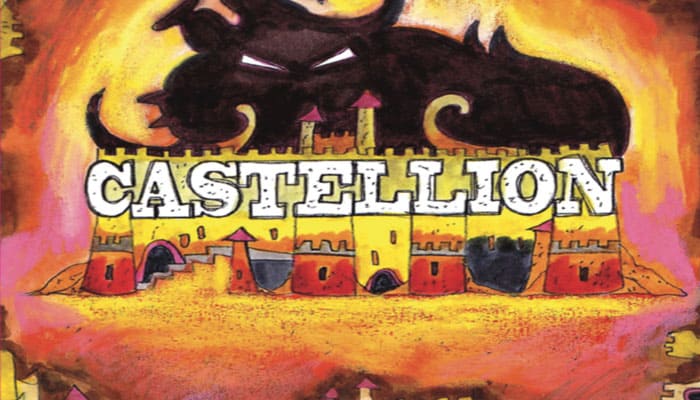 The dream world is under siege! The terrifying Menace, an entity of many faces wants nothing more than to ravage everything in its path. Only you can stop it, as commander of Castellion, the majestic shape-changing fortress.

But, before you encounter the Menace itself, you may wish to learn what is taught at the School of Architects, or submit to- training at the ^Admiral s ^Academy. ..

Castellion is a tile game that may be played solitaire or co-operatively with a second player. The game presents three successive levels of play:

To win the game (regardless of the selected level of play), you must overcome three ordeals. To overcome an ordeal, you must build your castle according to the instructions on the Ordeal cards, while making sure that your castle's foundation is complete.

As time is short, you must build your castle as efficiently as possible, carefully choosing where to place each Defense tile.

With the exception of the Ordeal cards, the components used in each level of play are identical.

Therefore, regardless of which level you wish to play, you will still need to read the rules from the beginning.

The School of Architects: Introductory Level

Place Exam I card and Exam II card faceup on the table.

Shuffle the 3 remaining Exam III cards and choose 1 at random. Place the chosen card next to cards I and II, and return the remaining 2 cards to the box (they are no longer needed).

Each turn, you must draw a Dream tile. You may decide whether to draw from the regular pile or from the "safe" pile.

Note: The "safe" pile contains 12 Defender tiles (no Traitors). Once it is depleted, you must always draw from the regular pile. Use this limited resource wisely.

There are two tile types which lead to three possible actions:

A. Place a Defender Tile

You may add a Defender tile to your castle, thereby increasing its resistance to the ordeals that await you, most notably by creating defensive formations (page 8). A tile placed in your castle remains there until it destroyed or moved, or until the game ends.

When placing a tile, you must follow these 4 placement rules:

As long as you follow the placement rules above, you may place Defender tiles wherever you wish. However, you will want to do so in such a way that you create defensive formations, which require 4 Defenders of the same faction (as a reminder, the four factions are: Seer, Chameleon, Juggler, and Pyro) placed in a particular pattern.

There are 3 defensive formations:

Note that a defensive formation is not canceled if Defender tiles of a different faction are placed next to it.

Note: The faction used to create a defensive formation does not matter. A tower made of Pyros has the same effect as a tower made of Seers.


B. Discard a Defender Tile

Place the Traitor tile to the left of the lowest numbered Ordeal card (note: the black border around certain tiles has no significance in the introductory level). Keep a close eye on the number of Traitor tiles next to an Ordeal card.

You must encounter an Ordeal when the number of tiles next to it is equal to the traitor number on the Ordeal card.

You must encounter this Ordeal once you have five Traitor tiles next to it (or if you complete your castle).

Verify that you have a complete foundation and have built the defensive formations required to pass the Exam (in this case: 1 tower, 1 bastion, and 1 line of defense).

If you have failed to build the required defensive formations, or you do not have a complete foundation (6 tiles on the bottom row), you fail the exam and lose the game!

If you have succeeded in building the formations and your foundation is complete, congratulations! You will continue on to the following exam. Remove the Ordeal card and all Traitor tiles next to it from the game.

Failure: Only 1 formation, AND an incomplete foundation.

Success: The 3 defensive formations AND a complete foundation are present.

You must encounter this Ordeal once you have two Traitor tiles next to it (or if you complete your castle).

However, if your foundation still consists of 6 tiles, congratulations! You have passed the second exam.

Remove the Ordeal card and all Traitor tiles next to it from the game.

Special case: if you encounter the first exam by completing your castle and succeed in passing it, you will immediately encounter the second exam (which you are certain to pass). Remove these two exams and all Traitor tiles next to them from the game.

Failure: The new foundation is incomplete.

Success: The new foundation is complete.

You must encounter this Ordeal once you have five Traitor tiles next to it (or if you complete your castle). Verify that you have a complete foundation (6 tiles) and have built the defensive formations required to pass the Exam.

If you have not, you lose the game!

If you have, you win! The Master Architects grant you their prestigious diploma, and recommend that you advance to the Admiral's Academy before facing off against the Menace.

Failure: One of the required towers is missing AND the foundation is incomplete.

Success: The 3 towers and 2 bastions are present. The foundation has 6 tiles.

The Admiral's Academy: Base Level

All rules of the introductory level apply to the base level, with the following exceptions and additions:

Note that each of these Simulations must be encountered after 3 Traitor tiles have been placed next to them (or if you complete your castle). If you fail a Simulation, or end with an incomplete foundation, you lose the game.

B. Discard a Defender Tile

From now on, whenever you choose to discard a Defender tile instead of placing it, you activate its special power. The effect depends on the faction of the tile you discard.

Note: You do not need to follow placement rule 3. In other words, tiles of the same shape may be made adjacent using this power.

Reveal 4 Dream tiles and place them faceup. These tiles may be revealed from the standard or "safe" piles in any combination.

Important: Whenever there are revealed (faceup) Dream tiles, you may not choose to draw a facedown Dream tile. You must play (place or discard) all the revealed tiles before continuing to draw from the facedown piles.

Recover a Defender tile from the discard pile. The tile you recover must have the same shape as the discarded Chameleon. Then, immediately use (place or discard) the recovered tile.

The Pyro has two effects that occur one after the other. First, choose a tile in your castle to destroy.

Note: If the destroyed tile was taken from under one or more tiles, the remaining tiles in that column immediately slide to fill the empty space.

Tiles of the same shape are permitted to become adjacent as a result of this slide. You may not destroy a tile that would separate the castle into two separate structures.

This tile must respect all placement rules, except for rule 3. In other words, tiles of the same shape may be made adjacent using this power.

From now on, you may choose to discard a Traitor tile instead of C) placing it next to an Ordeal card, allowing you to prevent an encounter from happening before you are ready.

But this action comes at a price. When you discard a Traitor tile, you must destroy 4 tiles in your castle.

Important: There are 3 Traitor tiles with a black border. If you draw one of these, it must be placed; you may not choose to discard it.

Note: If the tiles you destroy are under other tiles, the remaining tiles in the affected columns immediately slide to fill empty spaces.

Tiles of the same shape are permitted to become adjacent as a result of a slide. You may not destroy a tile that would separate the castle into two separate structures.

All rules of the base level apply to the expert level, with the following exceptions and additions:

Shuffle the 4 Assault I Ordeal cards, choose 1 at random, and place it facedown on the table (return the other 3 to the box). Do the same with the Assault II and Assault III cards.

Note that each Assault must be encountered after only 2 Traitor tiles have been placed next to them (or if you complete your castle).

From now on, the defensive formations each provide a special power (in addition to being necessary to counteract the effects of the Ordeal cards).

If you have 4 lines of defense in your castle, you may discard Traitor tiles without destroying anything.

Reminder: Black-bordered Traitor tiles may not be discarded.

The tower (4 adjacent Defender tiles of the same color in a vertical line) : When you complete a tower (place the 4th tile), choose one facedown Ordeal card and reveal it. If all Ordeal cards have been revealed, this special power has no effect.

The bastion (4 Defender tiles in the same color in a 2x2 square) : For each bastion in your castle, you destroy 4 fewer tiles when you fail to construct the defensive formations required by the Harpy, Behemoth, or Horde Assaults: The four avatars of the Menace). The Bastion does not prevent the destroying of tiles executed by the Earthworm Ordeal cards.


The Four Avatars Of The Menace

Each of the expert level Ordeal cards must be encountered after 2 Traitor tiles have been placed next to them (or if you complete your castle).

Regardless of which avatar is encountered during an Ordeal, your foundation must be complete (6 tiles) in order to continue. Otherwise, you lose.

The Harpy, the Behemoth, and the Horde

Contrary to the rules of the beginner and base levels, failure to satisfy the building requirements of Ordeal cards in the expert level does not result in immediate defeat; instead, you must destroy a number of tiles in your castle.

The number of tiles you must destroy is indicated on the bottom right of the Ordeal card (and is reduced by 4 for each bastion in your castle).

Note that if your castle contains the defensive formations an Ordeal requires, the penalty is not suffered.


This avatar behaves differently than the others: it forces you to destroy 1 or more of the lower rows of your castle (Assault I - bottom row; Assault II - bottom 2 rows; Assault III - bottom 3 rows).

After the required rows have been destroyed, the bottommost row of those remaining is considered your new foundation (which must be complete, or you lose).

Again, a Bastion cannot reduce the number of tiles destroyed by the Earthworm.

Here is a reminder of the victory conditions, which are the same as those in the introductory and base levels.