Setup and gameplay is the same with these following changes: During Setup, give the third player the Snitch Reference Card. We recommended that the Snitch is already familiar with Caper.

The goal of the Snitch is to have the Masterminds score closely to one another. At the start of a round, instead of dealing the Round cards to each Mastermind, deal double the amount shown on the Round Tracker to the Snitch to form the Snitch Deck-keeping all cards facedown.

Now, the Snitch deals one card face-down from the Snitch Deck to each Mastermind.

Setup and gameplay is the same with the following changes: Give the other two players Lookout Reference Cards.

The Snitch card is not used. Each team will have a Mastermind and Lookout with matching Reference Card colors (Mint Team vs. Cream Team). Masterminds sit across from one another with their team's Lookout on their left. Each team's goal is to score the most Points.

At the start of a round, the cards are dealt to the Lookouts. Each Lookout chooses two cards and passes them, facedown, left to the opposing team's Mastermind.

Each Mastermind now plays a card in turn order. Masterminds cannot discard cards to get

, unless they do not have enough Coins to pay for any of the cards.

Forcing the opposing Mastermind to discard will give their team

when scoring. Try not to do it. Instead of swapping hands, the Masterminds pass the remaining card left to their team's Lookout.

The Lookouts start a new turn. If the Lookouts no longer have cards then the Masterminds discard their last card to end the round.

for each Gear card in their Discard Area. Include these Points in the

section on the Score Pad.

The team with the most Points wins! 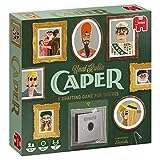